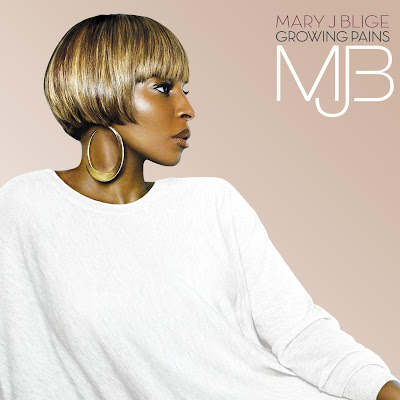 Love the new album cover. It's very iconic, which is what diva album art should be: a specific image that sticks in the mind and tells you something about The Woman at this point in her glamorous, tortured life. This time she giving regal. Still don't love that logo, but font whores can't have everything.

Ya gotta love Mary J. Blige. Every. single. damned. album. is about The Real Mary. How she's finally being honest and accepting herself. Anyhoo, check out this interview from MTV in which Mary incomprehensibly discusses herself and the concept for her album.

I'm just a mess like every other person that's a mess out there. And it's going to take probably a lifetime to get to a point in my life where I'm like, 'Oh, I'm perfect.' I don't think that will ever happen. So as long as I'm a human being and I'm not perfect, I'm able to say I'm having some growing pains. Because in order to sustain where you are once you made such a breakthrough that everyone is looking at you, now everyone is like, 'Ooh, is she gonna make a mistake?' Yes, I'm going to make a mistake. Yes, I'm still gonna do things. And that's what Growing Pains is about, it's about finally not whining about the pain, Mary J. Blige, and accepting the pain that comes with growing.

Be sure to check out her poppin' fresh new video Just Fine. It is whack. It's kind of cute to see her dancing, but there's something uber geeky about it too. Check out what else I've said about Mary here.
Posted by xolondon

Email ThisBlogThis!Share to TwitterShare to FacebookShare to Pinterest
Labels: MJB

That Mary, she can sing, no?

Like this song, the synth thread is a delight, but it seems a little bit 'thin'.

How about getting a Freemasons remix for this?

Personally, I never "got" her. I don't think she has the voice everyone gives her credit for, and often times live she's out of key and screaming and just all over the place.

And who are these people...this "everyone" she's always paranoid about judging her.

I realize she's apparently had some traumatic upbringing, but get in line, babe. Has she got all her limbs? Does she have a pretty cushy job now? With a nice bank account?

It's like you said, every single album is about "the real Mary," like she has this huge chip on her shoulder and she's gotta always be a martyr and zzzz zzzzzz zzzz zzzzz.

i don't get her either. In fact for the longest time (until quite recently) I thought she was Queen Latifah - i mean i had never heard Queen Latifah sing other than in musicals, so when Mary came on the radio i always thought it was QL for some reason. Til very recently in fact. Yikes!

Plus her name is mary which was/is the name of my evil old boss with no arms and legs.

On the plus side, i assume there is still a Maroon 5 duet?!

I do love me some mary. I am probably the only one in India who has played "what's the 411?" in it's entirety to a baby still in the womb, but there are so many good tracks on that album. "changes I've been going through" and "sweet thing" remain on my top 20, and it reminds me of a time when sean puffy p. diddy jacked up mess combs actually did good work producing.

she actually can sing really well, but lately she seems to be losing the voice a little.

and I know someone who had a really interesting interpretation of the lyrics (a la "flies in the vaseline) for "family affair".... remember??? :))

Would that be something do with "My soldiers dance for me"? Well, shit, that song also had some made-up words, so you can't blame a boy for confusion!