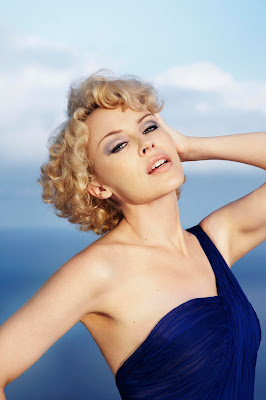 Tis the season of song titles like Amazing and Wow. The usual trajectory is disappointment. Neither Madonna nor Seal's Amazings are. Happily Kylie Minogue's Wow - surely a forthcoming single? - is worthy of its title. Evrey longstanding artist needs a song like this, one that reminds you of their very best work. It encapsulates all that is "right and good and joyful" about the much-loved Kylie.

If you follow the blog/board commentary, you'll know that Wow blends the best elements of Love At First Sight and old "SAW" Kylie. 3 very tight minutes of pure pop.

The lovely details: The opening keyboard, the 90's chunkiness of the arrangement, the moments that "zap" (hear :07 - :10), the way the song hinges on layers of vocals (yeahyeahyeah), the sweet high-end parts (the way you walk...) and of course, the very high-def effect of the Wowwowwowwow. The middle eight is, thank God, a nice bit of poperatic trilling, just before the song wraps up with that underwater effect straight out of Ibiza, where it was written with Greg Kurstin.

For Kylie X, I will be reviewing certain songs in individual posts, as I did with Madonna and Goldfrapp. You can read them all with the KylieX tag.
Posted by xolondon

I love Wow. And Speakerphone. I cannot get enough of it. I have resisted listening to this CD before the official release date. However Speakerphone was metaphorically thrust in my face and as such i had to swallow.

And its quite stunning. As is Wow!

That being said, I love WOW.

I'm halfway through it right now. So far no duds! I'm liking it much better than 'Tangled Up', which is a bit of a mess...

The other note-worthy thing about this song is

"you know you're made in heaven"

... making reference to one of her favourite SAW-era songs, which is clearly a favourite of hers (and mine!) - she featured a gorgeous slowed-down version in the 'White Diamond' movie.

Can't wait to read the future reviews. Agree 100% that is should be a single and that it's pure pop delight.

Wow is Amazing. Which could be read a few ways as that track was my favourite from Music and I feel that Wow is an early contender for fave from X. There are lots of unofficial rumours that it will be the second single - whatever, I shall decide it is anyway! I often ignore official releases, it ends up disappointing me!

Oh it's just lovely isn't it? I'm feeling the love in a BIG way for "Wow," that chorus is heavenly. My single choices from X would be (in order) "The One," "Wow" and either "In My Arms" or "Stars."

Am also eager to hear whatever version of White Diamond is coming out next week.

I think I've waffled on about how good these tracks are for months now but Wow is indeed my favourite.

Since "2 Hearts" was such a non-starter here, this really should be the "official" first U.S. single.