Kylie X: The One 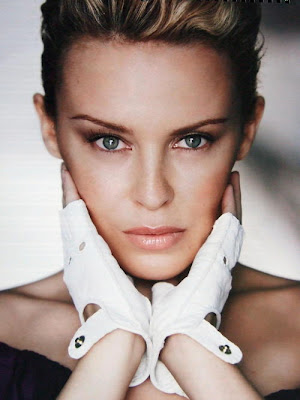 The One is spiritual disco. More contemporary than many of the songs on X, it's a mid-to-uptempo, but has a reflective quality signaled by the New Order-ish guitar that launches the song 14 seconds in.
Apparently mixed by The Freemasons, this doesn't really sound like their work, which bodes well for their future. The track is really simple: the chorus is "I'm the one. Love me, love me, love me." That's it! The first time you hear it, it may seem repetitive, but the song's ultimate effect is gossamer, even soaring.
At 4 minutes, The One is actually among the longest songs on Kylie X. The middle eight at 2:49 is really the emotional heart of the song, with it's Tommyisms: "Can you hear me, can you feel me?" There are some pretty background ad-libs at the end too - listen close - before the song literally dissolves into a mist, the same way Kylie does when you turn the music off.

Side note: The photo above is from 2007. She looks a lot younger with the darker roots. Just sayin'.
Posted by xolondon

Interesting that this was mixed by The Freemasons, how I managed to skip that piece of information I do not know.

The chorus is so simple, but the songs airy quality suits it all so much. With the little amount of words she uses, she says so much. One of her best songs to date I think.

PS: You're right about the darker roots making her look younger.

Another killer track - the beginning reminds me of OMD's "Based on Love's Theme".

Johnny you just inspired me to buy that OMD song!