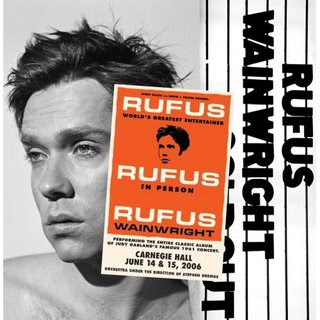 Okay. I say this with love: This cover is a disaster. What is that look on his face? Either he's shitting his pants, coming down off a night of Special K or making googly eyes at his "proportioned" boyfriend. Whatever, it is not hot. N-O. The cover should've been a blowup of the orange poster.

Rufus told journalists in May that he expects this CD to be a big seller. I don't. I think the rebel prince lives inside his own head when it comes to record sales. I do know someone who will be buying this no matter what...
Posted by xolondon

separated at birth? you be the judge!

Yip, I will be getting the duy-vuy-duy though whether this is his powerhouse big seller I also doubt. I think he's fantastic, but even so, as a fan, "everyone, let's watch Rufus sing The Trolley Song again!" will not be echoing in my living room.

That cover photo makes it look like he completely lost interest. Which, interestingly, is what a friend who I saw the Old Vic show with in May, thought of his recent (31.10.07) Hammersmith Apollo show. It was a direct replica of the earlier performance, "improvised" mumbly talky bits and all. Time for him to mix it up, I think, before he passes out altogether with self-induced boredom.

Rufus look totally over it... and high.

Although, he might be on to something... this might be the first CD of his that gays actually run out and buy....well, of a certain, pre-Britney/Kylie/ Paloeozoic age.

We'll see- he is SUCH an acquired taste!

And yes, he does look like the trainer woman... it's a thin line, isn't it?

As Tim Curry once sang: "...dont' judge a book by its cover..." I've just ordered mine from Amazon. I flew to London to see my dear Rufus performing Judy Garland 1961 stuff at the Palladium and what do you want me to say: I loved it.
We've already discussed this in the official board: we don't mind the cover, we like the performance, and personally as I whorsip Rufus I forgive him almost everything...no, EVERYTHING.

The Royal We From The Board, hmmm? I don't like the cover, but I will probably like the contents. :)

I'm a huge Rufus fan and have all of his albums but the whole Judy Concert thing (it was on TV) left me cold. Is this normal? :-)

The review from the new Entertainment Weekly (they gave it a B-):

"As a fan of Rufus and friend of Dorothy [Ha!], I was thrilled by the idea of Wainwright re-creating Judy Garland's legendary '61 concert. But not everything about this stunt merits documentation. His delicate upper range is nicely attuned to some of the ballads, but anything that requires belting is pretty much a loss. ("That's Entertainment"... isn't.) [Ha! Ha!] That said, if it drives anyone to Judy at Carnegie Hall - one of the best live albums ever - then bravo.