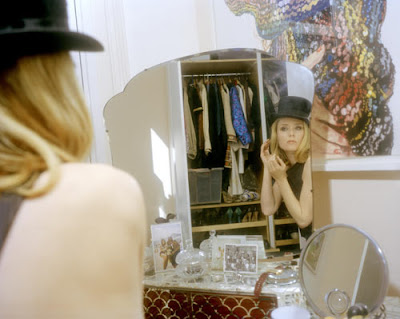 Preface: Have you heard Arjan's latest interview with Róisín Murphy? She talks about disliking reviews of her work - she's not even thrilled by good reviews because they get something "wrong." Here's the thing: we all have our little roles and I have to do mine without worrying too much about the artist. Often I'll just avoid writing about songs I dislike, highlighting the good stuff. You can't really do that with an artist like Róisín because she's too major. She merits real thought. Only speaking about what I like doesn't give my critcism any balance. S'okay Mlle Murphy, there is the cliche that reviews are more about the critic writing them. So here we go.

A gorgeous fact: Róisín Murphy's Let Me Know is doing battle with only one other track for my Favorite Song of 2007. The most joyous pop songs in ages, Let Me Know (watch it) is a little bit of Lisa Stansfield meets a lot of Nile Rodgers-era Diana Ross. Especially on the fantastic Chic-ish guitar breakdown. Everything is right here: the step step step hook on the chorus, the soulful intro and a vocal that is far more beautiful than most pop songs deserve (especially at 2:08: "I don't belong to you, like you don't belong to me / So don't hold on too tightly...").

Now we finally have the full Overpowered album. I irritated some bloggerati earlier this summer when I made an off-the-cuff remark that I wasn't fizzing at the slit over Murphy's first 2007 single, the album's title track... it didn't overpower me [sorry!]. Then I saw the miraculous video and warmed to the song as a rubbery electropop nugget. A bit cold, that one, but once I saw her sitting on the toilet, I fell in love.

Now I am back to lay bare more truths: Róisín's new album is not the album of the year, but it's close. There are many lavish, worthy tracks on it. Despite the artist's own commentary that each song was written to be a single, it is not an album that gives away its charms easily.

A few things up front. Róisín is not and never will be just a "girl pop singer." She is too spiky, elegant and erudite to appease the pop masses; I mean, she uses (non)words like "oxytoxins" in her singles. Nor is she what grabs headlines today: cartoonish, upstart-ish or media whorish. Her voice has a certain gravitas, especially in its deeper range that says, "I've seen some shit." But she also has control at her higher end, a softer pop voice. Her songs often come across as duets between these two sides of her character.

Aside from Let Me Know, the other immediate radio earworm is the second Andy Cato collaboration, You Know Me Better. It's a chunky pop/dance song with fast heh heh heh breathing and a slap slap slap chorus [she likes threes?]. Again, there is a moment at 2:43 - the middle eight - where the creamy vocal makes the lyric more poignant: "How many years can we keep going on this way? / Too afraid... too much at stake / I believe the friendship can surive / Or maybe it won't, if we do or we don't."

Checkin' On Me rocks Philly disco strings, brass and heavy bass. It's been clear since the Moloko days that while Róisín may have fair white skin, there's a hip black girl stomping around inside of her. I love how she snorts "yeah!" at about 1:47... she's tough, man, and she will call you out if you do her wrong.

Though the album lacks a killer ballad, Primitive is a moody, but ecstatic swooner. It has a great lyric referencing caves and the primordial soup and the chorus proper (at 2:04) is intense and passionate, set against a wash of slightly menacing synths and a bass male vocal line. The other ballad, Scarlet Ribbons, ambles along less successfully. The song reminds me of Culture Club, with its reggae shadings and white girl/boy soul voice. A tribute to a loving father, it's not really the orchestral masterpiece I'd hoped for. It's hard to rectify the matter-of-fact Róisín of You Know Me Better with the sentimental voice on this track. Chalk it up to the girl with a dual personality.

Overpowered, the album, is diverse and wickedly cool, but it's not perfect. I don't get Footprints at all, especially the way Róisín does that simple da da da vocal. Neither Body Language, nor the Richard X-produced Parallel Lives move me much either. What the album really needs, and this is something Tracey Thorn got right on her '07 album, is something really stripped down and timeless. Her esoteric debut solo record, Ruby Blue, ended with the Laura Nyro-esque Closing Of The Doors and it was like an afterglow.

Doesn't matter. Overpowered is steeped in what most pop songs don't really have: layers of emotion and meaning. No matter what Róisín sings, she sounds honest. Combine that with the sense that she never quite gives it all away, and you have a pretty intriguing pop voice. A woman, not a girl.
___________________________

How to pronounce her name: Well, Roe-sheen would seem right, but Róisín seems pronounce it Roeshing, like rowing with a sh in the middle.

see - this is what i wanted to feel like about the album. I blame steps. those bastards ruined my ability to appreciate fine pop :P

I pretty much agree with that. Yes.

That is an excellent review xo. There have been four album reviews I have read which have been my favourite of the year so far, and two of them are yours; the Darren Hayes one and this.

xo you have such a way with your keyboard.
excellent review.

roy-shheen...
i feel as if this is the closest we will ever see her get to mainstream pop.
i wish that they had tacked on modern timing though.

I was truly impressed with this review--best I've read all year. Your literary side absolutely shines here--thanks for brightening my day!

Can't wait to hear this trash! I'll put it on my Xmas list and make you buy it for me. yay!!!

I only came to read, but I need to say that this is an excellent and passionate review. Thanks!

Thank you duka. I don't think I've been called passionate before, but I like it!