You never know what you will find 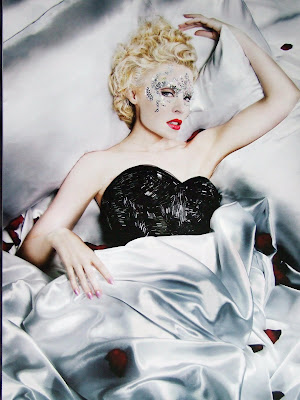 An image from the Kylie calendar!
Be sure to read my Annie Lennox review in the post below...
Scandipop Dept: I do not like BWO anymore. I just have to be honest. I think they must record a song each day in some closet and the new CD sounds like it. Sounds cheap! I also am not loving the September album Dancing Shoes, but Sad Song is great. There is a kneejerk thing each time one of these artists releases a song: It's brilliant! Sometimes true, but not always. Good enough is not good enough for me.

Should I be paying attention to Leona Lewis? Seems like a Mariah clone (circa 1989) to me.

Barry Manilow has covered Sailing. Just sayin' in case you might be a secret, closeted Barry junkie... not that I am. Really.

Natasha Bedingfeld's version of Ray Of Light is a shiteous mess, while Darren Hayes' version is sublime. My beloved-if-sullied-by-her-meh-solo-record Mutya Buena does a lovely Fast Car though. All for Radio 1.

Seal's first song with Stuart Price, called Amazing, has leaked. So far my impression is that it's a makeshift hook dressed up in a good production. The lyric is timely, yet cringe-inducing: "Everyone says you're amazing now that you're clean."
Today I bought Natalie Imbruglia's White Lilies Island for a dollar (you know where I got this Brittle Lemon). What are the best songs?

Did anyone notice that Kylie X contains a Freemasons production? Praise Be To God.

Sophie Ellis Bextor's label is rushing a Christmastime Greatest Hits CD for which she is currently producing new songs. A serious disappointment for an album released only about 5 months ago that has like 10 potential singles. Why not update Love Is Here as a duet with Dan Gillespie Sells and do a kickin' video? Hello hit music! Booyoulabelwhores.

The Alicia Keys album cover is a disaster. I mean, when is the album released? November 1977?

Meanwhile, I hope this is not Alison Moyet's album cover. It's no better.
PopMuse has a post on how you can downland Dan Savage's Savage Love Podcast! Do non-Americans know about Dan Savage? He's a sex advice columnist who is hilarious and incredibly right-on with his answers.
Posted by xolondon

"That Day," "Satellite," "Come September" and "Everything Goes" are probably my four favourites on "White Lillies Island," though it's pretty hard to choose, that is probably my preferred of her three albums.

Ace Annie review by the way, looking very forward to hearing the album.

The Alicia looks very '77, particularly the lettering. Okay and the hair. Alison Moyet looks like Ozzy Osbourne as a drag queen.

i love these types of posts from you and btw, your annie lennox review was a work of art. Right, Natalie - i really like that album and was obsessed with That Day for the longest time. there is a hideous video of me at home drunk making up all the words to it and getting them shiteously wrong.

I think BWO and to a lesser extent September have stopped challenging themselves. I think it speaks reams about my musical standards when i say i still adore both albums muchly.

I am starting to resent Darren Hayes big time and I have no idea why...

Woo for the Feeling. Boo for Sophie. WoonoBoo for your Sophie-DAn duet idea.

Discovered him in the Village Voice in '98, the summer I lived in NYC, then when he went online, I started following him there. Strange to read an advice column (of all things) religiously, but he's the best.

Love it when he responds to some long, tortured letter complaining about a useless spouse with: "DTMFA".

I think all of Natalie's WLI is great... but my favorite is "Beauty On The Fire," which was the third single... And of course there's her minor AC and VH1 radio hit, "Wrong Impression." It's a great, great album that soundtracked my 2002.

The world don't need a SEB greatest hits. All that is, sadly, is likely the label trying to fulfill the contract before they ditch her.

I'm not sure why, but I was really pretty excited about the idea of the new Seal stuff--but from what I've heard so far, I'm not really sold, or at least don't thing it's fantastic (yet--I want to hear more). Still, on the plus side, I think I've been inspired to go check his first album out from the library.

I do think that Stuart and Seal working together is a masterstroke of genius though, and I'm not even Seal's biggest fan. That said, I prefer the Thin White Duke remix of "Amazing" to the radio edit, and it just makes me pine for another Price-produced Madonna album.

Kylie looks amazing. After listening to some of the leaked tracks again, I am even more excited about this project now. Good on her.

Poor BWO, tossed out like yesterday's trash. Let it Rain has a nice melody, as does Destiny of Love (great video too). I can see what you mean--they've kinda ditched the kooky techno-sex approach for a more pure pop thing, although I love the new cover images (at the expense of Army of Lovers fans crying derivative), as they seem genuinely likeable, albeit a long shot for any US fame. Although greatly agreed upon that the last album was a bit of a mess, the new album seems like a return to the sound of album 1 while incorporating some ballad-y-ness of #2 on a more epic scale. Shameless, yes, but shameless fun nonetheless (all hail the Swedes)!

We'll see about Seal. Stuart Price can only be good for him--surprised he even worked with Trevor Horn again after Human Being--what a disaster.

Flies are buzzing around BWO! ;)

Sorry, I did mean Natasha did a shitty cover of ROL not LAP.

Agreed on the Thin White Duke mix of Seal's song.

Poster Girl, the first Seal album is a masterpiece. Esp the first song! It has really great moody songs too, like Wild and Violet.

I totally missed the Dan Savage quotient of your post; I blame tiredness.

I am American and I do love him. First discovered him in 1995ish when I was in NY state and could get the Voice easier. Though I get the Voice online, I tend to read his column in our version of the Voice, the New Times, which isn't quite the same, but it does get me his straight-forward and hilarious responses. I loved when he told the foot fetishist that he/she was lucky as foot fetishing was such a vanilla kink compared to what else is out there.

He rocks my world.