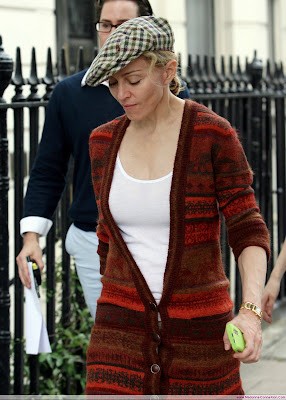 A story so incredible it is hard to believe... a reporter speaking to Bloc Party singer Kele Okereke:

What surprised you most about playing at Live Earth 2007?

Madonna coming into our dressing room because she's a super-huge fan. Our tour manager is this guy from Scotland that doesn't know much about popular culture and popular music. So when she came in, he alerted security and security dragged her out. They had her head in a headlock, and they were putting her out of the dressing room. It was really surreal, and everyone stopped speaking. And the only thing we could hear is Madonna cursing and saying she's gonna kill these guys.

Did you say Madonna was in a headlock?

Yeah. She's really tough because of all that pilates that she does. She [got out] of the headlock quite easily. And some of her people came along and told the security guards off, but she was so pissed off at that point that [when] I went to tell her that I was a huge fan of hers she completely freaked out and told me to get the hell away from her. And that was all in the space of like 10 minutes backstage at Live Earth.

Maybe you should dress up as her on stage to make things right.

You know, if she asks. I'm pretty sure if she didn't ask she'd be completely pissed off, and she'd completely freak out. I've already seen that she has a temper on her. To be honest, I don't feel like putting myself in the situation because I'm quite a skinny guy compared to the two security guards.

Okay, this story does not jive with me. I mean, your own manager pushes Madonna out of your dressing room and has her put in a "headlock"? [Note: Is Bloc Party that famous? To need that level of security? Does their man attack all unknown female interlopers who are 5'2" and 95 lbs?] Anyway, don't you run out and scream for him to stop: "She's Madonna!" No, apparently you go all quiet and watch! And then what do you do, if you're Kele Okerodookey? Become a fanboy and tell her she is great!

And all this takes 10 long minutes to transpire. Hmmm. Somebody's embellishing.

For some simpler, pre-Anglo-Madonna, check out the PopMuse post on Jose & Luis.
Posted by xolondon

Bloc Party have had 11 U.K. hits (actually, nine -- two of which were double A-sides), including "The Prayer," which went to #4 earlier this year.

I'm pretty sure he's all but admitted he's gay in the press, though (or maybe he has by now?), so I'm sure he was mortified by the whole thing.

OMG, the same thing totally happened to me, cause Maddy came around to my house to borrow a cup of sugar, but my dog had no idea who she is and had her head in a choke hold. I was MORTIFIED. I mean, my dog could have gotten rabies.

"A tour manager who doesn't know much about popular culture and popular music": that's an awesome choice of someone to help you with your career.

Your stats mean nothing Dluvly! :) Actually, Bloc Party is on my recent British Mix post. I am not saying they are bad, but it's an idiotic story. I hate it when people freeze in fucked up situations. It's a peeve of mine. Swing into action, mate! Save the old bitty!

this story is rubbish. there is no way it could have happened cuz even if the tour manager was clueless, as if the bodygaurds wouldnt have recognised her!!???