This is our last dance 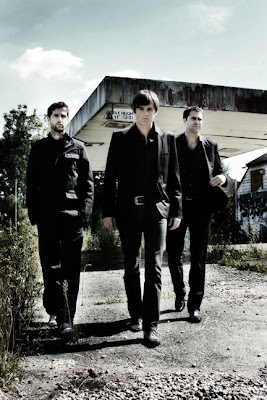 Keane are back on October 29 with a brand new single. The a-side is called The Night Sky and is a benefit for War Child, which helps children in war zones. The b-side is their cover of Queen & Bowie's Under Pressure, which Tom Chaplin certainly has the vocal chops for. They recorded that for the Radio 1 album out on October 1.

If I'd heard these tracks, I might tell you that Under Pressure is quite faithful - note by note almost - but sounds a lot like ELO. The Night Sky is short and mid-tempo, classic Keane, which means poppy and pretty. If I'd heard them, I'd say that!

The photo above is new for the single - Tom is almost unrecognizable!
Posted by xolondon

Chapter two in the book D'luv would have to be about how, as an 8-year old in 1982 whose parents had just gotten MTV, I became obsessed...no, OBSESSED...with "Under Pressure." I loved that there were clips from old horror films in there like the Frederick March version of Dr. Jekyll & Mr. Hyde and Nosferatu... I began collecting Famous Monsters magazine because of that video.

Okay, just re-watched the video for the first time in, oh, 20 years, and there aren't the clips I mentioned above, though there are some from other horror films. Nonetheless, I was enthralled with this song as a little kid. I played that 45 to its scratched death.

"Love dares you to care for the people on the edge of the night." Is there a better lyric ever?

i'm ready to welcome keane back into my good graces if only for a reconciliatory hug with Tim...

Now THIS news has me excited. I'm hoping new material wont let me down as much as "Under The Iron Sea" did.