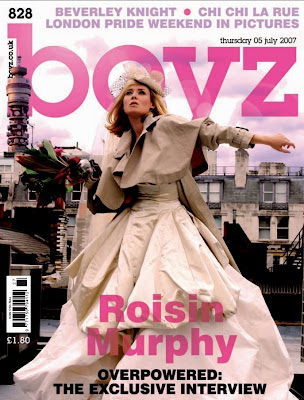 The new cover of London mag Boyz is quite the deluxious, isn't it? Roisin Murphy's workin' it for her new album (anyone know the release date?)Los Americanos can buy MP3s of her songs at 7 Digital by the way.

The interview that goes with this cover is a stitch. She is very funny. At one point she tells the writer how her art collaborator put her on the cover of Sleaze Nation magazine "in the back of a van being shagged by a roadie." The writer says, "Blimey. Actually shagging?" to which she responds, "No it didn't go in."
Posted by xolondon

The album will be released In early October.

Second (?) single is for release in the second week of September. Let Me Know.

The first single which they changed to sort of a teaser with two wonderful b sides was released early this month. Overpowered.

Stunning artwork on all of the singles and 12"s. In high fashion in ordinary settings. Gorge.