The prettiest girls you've ever met 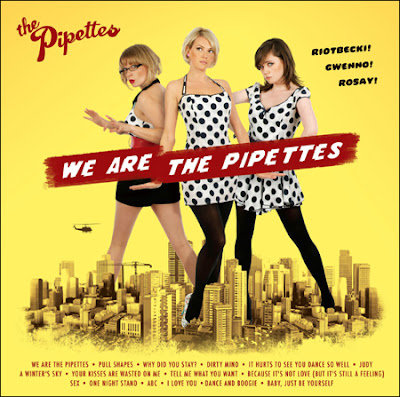 So the The Pipettes decided to do a new cover for the US release of their CD (Oct 2). Why? The first one was just fine! But here's the bigger news: they've added two new songs: Dance And Boogie and Baby, Just Be Yourself. Both are streaming on their MySpace page. It also appears the album has been remixed by producer Greg Wells. Hmmmm. Will I have to get this version too? Waste not, want not.
Posted by xolondon

Email ThisBlogThis!Share to TwitterShare to FacebookShare to Pinterest
Labels: Pipettes

Oh, oh, OH. Your blog is nothing but goodness tonight. Pipettes in the US in October? Huzzah!

Woohoo major news! Too bad the new songs are already taken down off their Myspace.
I'm still not sure how to respond to them now being on a major US label. Sure, the new cover looks awesome and they will have some decent exposure, but remixing? It all may sound more polished, with better production value, but I think the lo-fi-ness was part of their charm.
Still, very excited about the release! I never said it before, but 'We Are The Pipettes' was my second best album for last year. (Lily's was number one, but 'Pull Shapes' was my best song of 2006!)

I don't know why the album is being remixed since what I've heard sounds fine to me. I hope not that the suits at the US record company decided that the album had to sound more hip-hop for Clear Channel airplay!

Hate, hate, HATE that new cover, right down to the public domain font.

And why the remix? And why October, months after the buzz from the U.S. is gone?

I agree on the cover. Pukey.

Why not just have Timbaland and Nate "Danja" Hills remix it then huh?

Can't you just see the US suits in a meeting? "We need a new video, something more urban. The girls need to be wearing Cavalli, no bras."

I saw them play the 7th Street Entry in Minneapolis, and nobody in the audience knew how to respond. Halfway through, they asked, "Do you get it? Do you see what we're doing here?" Blank stares.

More pictures of The Pipettes can only be a good thing.

I've got almost all the songs already though.

Hi Auntie P. I miss your blog. Maybe you could have one of those ones with "friends" only!?

As for The Pipettes, I looked at my CD tonight to confirm that Greg Wells had nada to do with the British version, so it'll be interesting to hear what happens to a song like "Pull Shapes" - I played that so much that I know my ear will pick up the smallest of changes.

have heard the new mixes and not surprisingly Greg Wells was very faithful to the original vibe of the UK version... sounds a bit mo bettah.