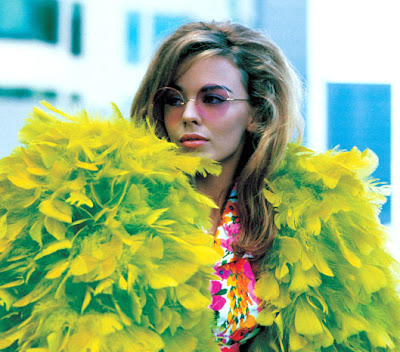 Hurry up, Kylie. Tricky Richard is melting down in Majorca with anticipation. We're all waiting to see if your new single is a cover of this song, because the chorus sounds like a potential hit. Wooooh!

Titney's song. Hmph. On Perez and everywhere else. What kind of a day is it when Titney releases a song that is better than Madonna's latest offering? It's still ghetto, but I do like the synth bed underneath the gimme chorus. I was expecting far worse. This song is almost pop music. She's still a crazy-doomed-basket-case.

Tremble Clef is back on. Daily! He disappeared for about 6 weeks and I was worried. Mainly cuz tha bitch needs to find me some new music! He does have seven inches... of the new PSB mix of Integral.

Calvin Harris is overrated. The evidence stacks up that he is a one trick pony. I do like his song for Kylie, but I'm on Team Roisin when it comes to Mr. Harris.

Eskimo Joe. Do any of my Aussie bums (geddit?) know this band? What is their story? I am a bit torn on whether I like them or not.

The Just Jack / Kylie collab is old. The song was already on my version of the album, he just squeezed her voice into it. I guess it leaves me cold for this reason. ? If you want to hear a great Just Jack song, download the moody, robotic Disco Friends (killer live version!).

Mika. I sold his CD for 7 dollars. I like three songs, but I'm over it.

Damian Leith. I think his new CD is a disappointment. He does a nice cover of Eva Cassidy's cover of Fleetwood Mac's Songbird, but the record does not live up to the lovely Night Of My Life (video).

Del Amitri! Remember those Brits? The Scottish lead singer Justin Currie has a new record I'm "investigating." He has a song called No Surrender that starts out all gorgeous and then has these whack lyrics about Japanese snacks. Odd innit? Try If I Ever Loved You instead. UPDATE: I love this album and the above-noted No Surrender is a frickin' masterpiece of a rant.

Lucas Mire has a sleek high rise apartment. Wouldn't you like to know how I know? Actually you can see it too... LM, if you get, like, robbed, don't blame me, okay?

Roisin Murphy's next single, Let Me Know. as I have said before, is going to save pop music. Wongie has a better quality version. The album edit is the real masterpiece. Bring on the album.

Jordin Sparks is deeply unimpressive. Her song somehow manages to be a combination of McPhee and Underwood. No small feat, but it still lacks distinction. It sounds like something a team of writers came up with - the whole thing reeks of extreme marketing.

That Madonna / Cate Blanchett Bust I did traveled the Interwebs last week, most times credited! Toot toot! Speaking of busts...

Madonna's shiteous The Beat Goes On got remixed by web fanaticists and ya know what? It still tastes like warm dingleberry pie.
Posted by xolondon

I hated the Calvin Harris album. It was so one dimensional and repetitive, all I could think was "why do people think this guy is talented?", and that was even after the supposed Kylie leak. Too bad about Mika though. Considering you can buy his CD new in US shops for around $8, I'd say you got your money's worth. Worth keeping though for "Lollipop" (it always brightens me day).

What are PSB thinking with that "Integral" remix that makes them sound more like Kraftwerk in hell than ever before? At least the original had a tune.

I had twelve inches, but I didn't think you could take it.

For what it's worth, I think that song would be a fantastic choice. Totally perfect for her, if possibly lyrically very slight given her life over the past two years. I would have thought she would want to lead with a statement song which she had co-written.

But, of course, we shall see, and soon, it seems.

I don't mind the PSB mix, but Brittle is right: I couldn't take the 12 inches. Esp because I have a very small... turntable.

I actually really enjoyed Eskimo Joe's most recent album, but was never a fan for the albums prior. They seem to be a good bunch of blokes too; give a decent interview, seem to really be enjoying themselves on stage as well. I'm not sold on the band completely, but there isn't really a terrible song on "Black Fingernails Red Wine."

I *am* enjoying the Just Jack/Kylie song though and, if anything, it's made me want to give the JJ album another go. Didn't really do anything for me the first two listens and was a little surprised at the buzz around it, so I sort of gave up on it after that. But I guess the Kylie addition has made me curious again.

I am really impressed with the Kish Mauve song and cannot wait to hear the Kylie version, if she is indeed releasing it as *the* single. People didn't think 'Slow' was a good first single choice for Body Language but I thought it was fantastic - it is brave to come back with something different and less obvious, I reckon.

I howled at the 12"/turntable imagery but that's just because I have a d-d-dirty mind.

I was over Mika the first week I listened to his album. He can kiss my ass.

I also like Calvin's CD, but it'll probably join Mika in a few months, as I got sick of it pretty quickly.

How funny -- I just posted about this -- Roisin's tune is a rip-off!

I like the PSB mix for "Integral!" I don't think they're aiming for a hit here, just being experimental, which the Disco compilations usually were.