Do not be taken, ye good people

UPDATE! I am bouncing this post. See comments field for my first-listen opinion of the new leaked song, The Beat Goes On. What do you think? you can probably find it here.

This is not the new Madonna album cover: 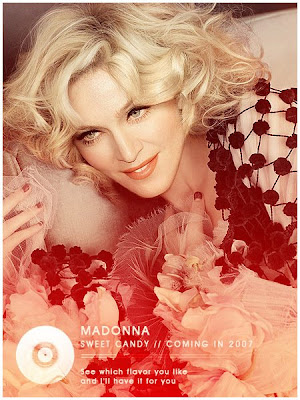 It is a very clever Photoshop of this: 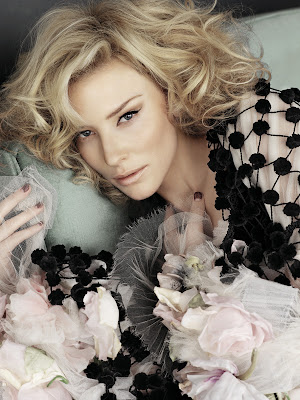 Bravo to whoever keeps doing these fake promos. They're fairly realistic and stylish enough to be real. Madonna should hire this person. I am tired of Steven Klein photos anyway.

As for the new music leak: trite. insipid. drivel.

Whoever does this is a genius with the Photoshop. That's a beautiful job. The graphic design otherwise is less interesting, and Madonna would never do "coming soon". We would also get music first.

I am still not sure why people do this sort of thing.

That new leak, "The Beat Goes On," is shocking, terrible stuff. Obviously as terrible as you can think 20 seconds of mono sound can be, but whatever, I'm really unimpressed.

I did, however, really like that "Candy Shop" leak from a couple of months back. But yeah, trite, insipid and drivel sum up my thoughts very well on that new leak. :(

Hmmm...her eyes seem a bit low on the face in the Photoshopped image, leading to a slightly deranged look.

Personally, the music's not TERRIBLE, but that's hardly the way I want to describe Madonna's new music. Fanf*ckingtastic is the way I'd rather describe it but it just doesn't fit what we've heard so far.

Right. So the HQ of "The Beat Goes On" has leaked in full. I like it a lot better now that I can hear it in full but, still, it's nothing brilliant. The wanky talky bits by Pharrell and Mo at the start are laughable.

It sounds a lot like the Bedtime Stories era though I feel. It's an okay album track, definitely not single-worthy. Did you hear she's been confirmed to do the MTV VMA's? I really think we're definitely getting this album in November at the rate this is going.

Yeah, the whole let's do something different? Different to what? It DOES sound like Bedtime Stories songs and the lyric has "get it together" which is a shockingly bold statement right?

The chorus is weak and repetitive. Pharrell is washed up.

AT LEAST it does not sound like Wind It Up or Hollaback.

One hopes this is a teaser track and not on the final CD. It is a C effort.

I think it's interesting that the only songs we've heard anything of are the Pharrell collaborations. I am more and more perplexed by that talky bit which I began liking for 2 listens but now hate again.

She'd better have some mind blowing stuff hidden tightly under that yoga mat of hers.

I have listened to it once. Slightly worried...I love Annie Lennox. The most amazing concert I've even been to.

Regaring the intro; it would have been more honest of Madge and Pharrell to say "Let's do something that Clear Channel will play the shit out of" instead of "let's do something different." The track's hippity-hoppity-clappity production annoyed me when it started to kick in at the 0:40 second mark. Disposable. I want "Confessions" Madonna back.

The bridge is nice (the 'always the bridesmaid' part) but the chorus is Z-grade. And the lyrics...did Britney write them for her?

Matt Rettenmund names the Photoshop 'artiste' who keeps doing these fake covers. He's clearly very talented but with far too much time on his hands. And also quite quite mad.

Robster has talent that engulfes this and other galaxies. :-)

The two leaks were tests...
The Beat goes on was a test to see if a certain someone could be trusted, and candy shop well, those are clips of my song (A,
B- SIDE) that was leaked. A fan or someone put those clips together and made some shot at a song.
Just know this... They are NOTHING compared to whats about to hit! Leaving WMG is going to be sad however, after 25 years The last album will be a complitiude of back breaking beats and mind blowing sounds... If any of you like Music, Holiday or Hung Up, well the entire ALBUM will be beyond those songs... SO Put your DANCING shoes on. Its a adios to Warner and a a certain way to "JUSTIFY MY LOVE"