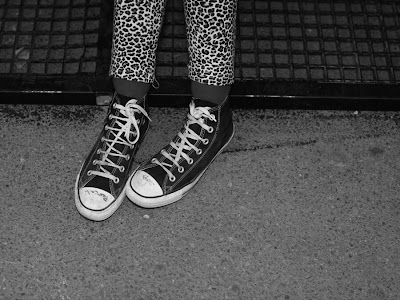 This morning's lost post is back! A recap of the recent new singles by pop royalty...
Girls Aloud Sexy No No No
A by-the-boobies number for the Aloud, but it really works. The opening minute is fucking thrilling, especially the second set of no no no's ("hell no!") at 0:51 seconds. I know one hot chick who will be driving around LA, in her bitchin' Camaro, with this song blasting. Watch the video. Grade: A
Annie Lennox Dark Road
I now quite love this song, but for one flaw: the screeching heyaheyaheya middle eight which disrupts its "stoic elegance" (Annie has that genre licked). Word is that the album is a rollicking blast, so why they chose to launch with this song, I don't know. By the way, to clear up confusion, I am a Bare fan. I love that record, though not as much as the previous two. Watch the video. Grade: B+
Duran Duran Falling Down
I intially liked this song, but now I find it a weak choice for a single, especially since I've crinkled my nose, squinted my eyes and admitted that Nite Runner pops. This one goes nowhere: it's not bad and it's not great. The chorus has a horrifying lyric: "Because I'm falling down / With people standing 'round / But before I hit the ground..." Simon, you can do better, though I'm glad you didn't do worse. Grade: B-
Sugababes About You Now
I know how I feel: If I wanted Avril circa 2004 or Pink circa 2006, I'd play them (well, only the latter - Avril and I will never be). I count on the 'babes for more depth than this slice of American pie. The middle eight, as noted by zillions, is quite nice, but other than that, why would you play this more than once? I should also note that the new sophisticated image does not work with the song. Hear it on Youtube. Grade: C
Madonna The Beat Goes On
Where to begin on this sibling of meh 1994 b-sides Let Down Your Guard and Up Down Suite? Pharrell Williams is all hot on himself because he is chillin' in Dade County with the Queen. He fills every moment she's not warbling with his own non-singer vocals. Timbaland is usually guilty of this too; it harkens back to the days of Rodney Jerkins, when every song had him intoning "Darkchild" at the beginning. Note the song is neither "something to think about" or "something other than the same old thing." Don't even get me started on the shrill section posing as a chorus. Hear it free at any corner bodega! Grade: D
Yes, I know I reviewed some of these songs already, but a guy likes to change his mind... which reminds me, you maynot have noticed that I edited the Darren Hayes review. I added a bit about Future Holds...
As ever, photo by Hedi Slimane
Posted by xolondon

If it weren't for Heidi's section, I'd find "About You Now" a complete waste.

I think there are good elements in the Sugababes new single. Its not immediate and it doesnt grab you but perhaps it works over the head in the long term. Perhaps in the context of the album its come from - it will make sense.

The Annie Lennox song is tedious. As is the video. I think she deserves an "E" rather than a b. But other than that, I agree with these grades Mr.XO.