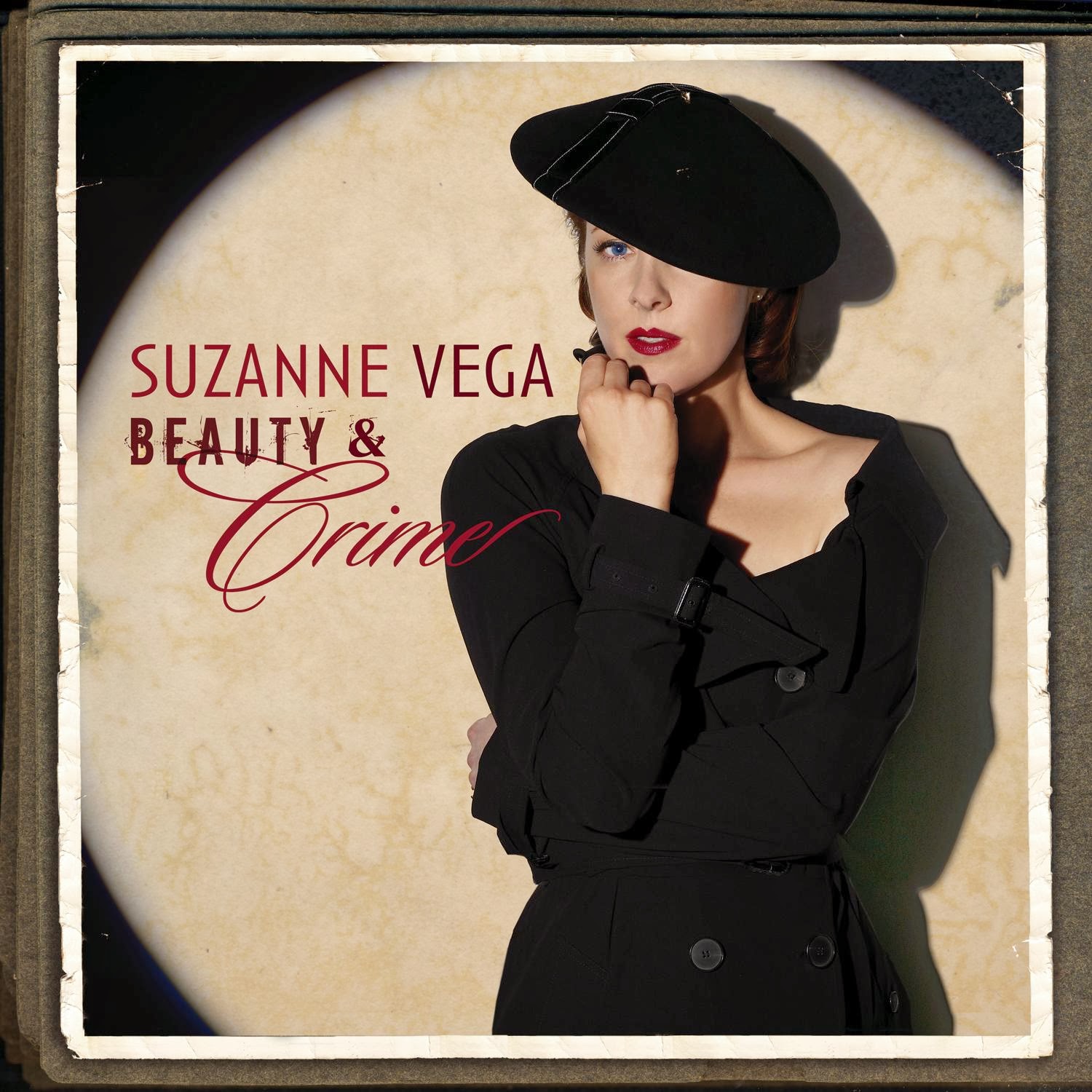 If you're of a certain age and sensitivity, you probably know the music of Suzanne Vega. I first discovered her when she did the amazing Left Of Center on the Pretty In Pink soundtrack (watch it). That song has the power to speak to, like, every emotional teenager in one way or another.

That debut album had so many great songs for a poetry-obsessed teen and its follow-up, 1987's Solitude Standing, was even more perfect. Most cities at that time in the mid-eighties had an indie or college station. In Washington, it was WHFS. They would actually play Suzanne rarities during the normal rush hour! It's hard to imagine this happening now, but there was point in time when her child-abuse song Luka [video] was a huge international hit. Now the charts are more about non-singers who do T&A and the music is incidental. At the time, people considered Madonna to be the downfall of art, but we didn't know how the popular music would become a case of diminishing returns in regard not only to vocal talent, but to a point of view beyond one's booty. In fact, I'm not sure the the word "booty" existed in 1985.

Suzanne is soon to release (or has already in the UK) her 7th album of original material and the good news is that, in 2007, she still has the same combination of qualities that made her so refreshing in 1985. The album, Beauty & Crime, is produced by Jimmy Hogarth (who also produced Sia, Corinne Bailey Rae et al) and is all about New York City. The Beauty is just that, with great string arrangements, and the Crime is represented by grittier tales.Blue Note has a long PR piece on the record. Suzanne says this:


It seemed natural to write a bunch of songs that were about New York or little stories that had New York as a character... I feel like I really stretched my limits. I pushed myself out of my comfort zone—to sing in keys I wouldn’t have sung in before, to work with different textures, to be unafraid of doing whatever sounded good to me. I wanted to make a modern classic.

Watch 2 mins of the Making Of EPK:


Beauty & Crime is Suzanne's best record since Solitude Standing twenty years ago. The 11 songs - not 15, thank you - are concise, tightly arranged and highly melodic. And her voice! At 48, it has not aged.

My favorite, Pornographer's Dream, references Betty Page and poses a question: what really is a pornographer's dream when it all comes true in front of him? "Wouldn't he dream of the thing that he never could quite get the touch of?" Mixing bossa nova verses with a sort of climbing orchestral chorus, the song is chill-inducingly pretty.

An elegy for her late brother, the wistful Ludlow Street is about the evolution of Manhattan neighborhoods. You go back years later and the buildings may or may not be there, but if your people are gone, then something has changed. "I find each stoop and doorway's incomplete without you there." The track's mix of acoustics, synths and strings is more lush and complex than anything Suzanne has ever done. She is paying as much attention to atmospherics as she is to lyrics and the songs are better for it.

Anniversary could sit next to any of the songs on that great 1985 debut, and it's one of the few September 11 songs I can stomach: "Clear the way for all your private memories as they greet you on each corner... make the time for all your possibilities. They live on every street."

The lyrics for Angel's Doorway read as a classic Vega narrative, but the arrangement is like nothing like she's ever produced, with subtle electronic instrumentation (I love the ping-ing on the chorus), double-tracked vocals and, like much of the record, an aura of urgency.

What a thrill to hear this album. This happens with artists who've maintained quality over the long haul: Listening to Suzanne nail it with Beauty & Crime is like meeting an old friend you've not seen for years. After a moment of trepidation, you realize that, despite distance or neglect, the spark remains and the conversation picks right up where you left it long ago.

Solitude Standing is the one album that I have bought. She just seems like someone you'd want to listen to all summer long.

This is a great piece of writing on Vega and it's making me seek more of her music. Remembering that whole "Tom's Diner" thing - All those mixes.

I loved that first track from "Solitude.." which has the line "Wings are nearly free"

This post pleases me so much as I have been a fan for so long, and seen so many Lilith-ites come & go who just didn't have the consistent writing and mood creating ability that Suzanne does. My submissions to add to a favorites list:

Are 20 good songs too many to expect from one artist???

what a great write up - your passion for her music really shines through, I will immediately put this on my must listen list. It worked for the sara cd, which i now love...

"Best album since Solitude Standing.." is high praise indeed and I certainly hope you're right. Those first four albums are just magnificiently luxurious and eccentric at the same time.

I'm going to her show on Weds and can't wait! A not-at-all-exhaustive list of my faves would be:

Aside: My personal fave album used to be/is Book Of Dreams, and I later found out that it's Suzanne's least favourite! Which I find cool, in an au contraire kind of way.

I have to correct myself, that the track that I referred to on "Solitude" was actually the third one, not first. "Ironbound/Fancy Poultry"

The album is a bit more of a grower for me, but I am committing to loving it...(love is a decision, XO!) and have "Frank and Ava" on a mix here at the beach. I notice everyone keeps singing it after it stops.... Love "Ludlow Street" the best, so far....

Some of my favorite SV moment include some guy trying to chat me up on AOL back in the day...He said he loved the same kind of music as I did and so I said, prove it. He said, ok. So I said, what was Marlene on the Wall's destiny? And he wrote back, without missing a beat, 'that she's changing.' I couldn't believe it. I was definitely wooed. (I'm so easy!)

Also, in one of my cheesier moments, I did a cover of "Luka" at my CD release party....I'll have to share with you.

Interviewed Ms. Vega several years ago during her Retrospective tour and she is one frosty mama. Brrrrrrrrrrrr. (On par with Missy Higgins!) She was actually the final straw in my now-cemented credo: Never meet your heroes.

But, darling XO, I can't take my own advice: I still want to meet you one day!

I saw the funniest thing a couple weeks ago. A woman was answering a question about 80's lyrics on Jeopardy, and the question was, in the Suzanne Vega song "Luka", where did Luka live?

One woman buzzed in immediately and said "CROATIA"!

Guess she was thinking of that doctor on ER, but Croatia is a far cry from the "second floor, upstairs from you"...

I also really, really like SV. The only one I have is Retrospective which I bought at Borders along with Rilo Kiley. It's a good collection of songs.

I'm pretty sure I got the tape out from the library and listened to it. It was quite good. Solitude Standing I mean. Very folksy.

Supposely, she wrote Gypsy when she was 16. Sigh. My poetry at 16 wasn't nearly that good.

The Queen and the Soldier
99.9
Gypsy.
Marlene on the Wall.
Maggie May
Caramel
Blood makes nose
Left of Center (of course.)

What kind of an 80s teen would I be not to include a song from the fabo. Pretty in Pink soundtrack which I played a lot in college. And have songs on a mix tape from my senior year. Though not intriguingly enough the title song.

this was a fantastic post. You really brought it all back to me. I haven't listened to Ms. Vega in many moons, and yet, I lived on her first two albums. I still think of myself as a small blue thing.

I have both of them on vinyl, so, sadly, I can't run and listen to them. Maybe I will treat myself to them on itunes.

Either way, you've totally made me want to hear the new album so well done, you.

Isn't it strange that we were both out there - you at tower records annoying your parents (I'm miss world anyone?) and me writing lyrics in lipstick on my mirror over in Virginia Hall.... we didn't meet until a couple of years after this...

it was lovely reading ur review