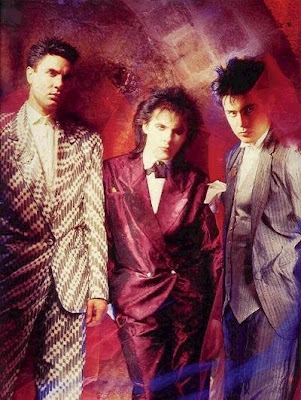 Looking At Them recently did a post on Arcadia, my fave Duran Duran spinoff group. Their CD So Red The Rose, released for Christmas 1985, was better than many Duran albums; I actually play that album more than any "D2" disc. I love Election Day, the wintry Goodbye Is Forever, and The Promise in particular.

Nick and Simon originally intended to do an album of cover songs while John and Andy tinkered with the meh Power Station, but it grew into something more and Roger joined them for the recording. I'm not entirely sure what musically separates So Red from a Duran album, bar the lack of John Taylor and the extreme amount black hair dye doused on Simon and Nick's 20-something heads. The sound is lush, but ultimately cut from the same cloth as 1984's clangy Wild Boys. Some of it sounds a bit dated now, but there were some risks, like the serious and arty The Promise, which featured Sting on backing vocals.

So Red The Rose is available on CD for a good price at Amazon Marketplace - and it has gorge cover art - but it's also at iTunes US and UK.

The group did a lot of videos for the project, three of which are at Looking At Them. I think Simon looks very Rufus Wainwright-y in the completely wrong video for Goodbye Is Forever. Below is a special Making Of they did for that one...

After recording, Roger Taylor dropped away (to the loony bin?) and Nick and Simon were left to promote the album alone, as they did below, performing Goodbye Is Forever on Terry Wogan:

You can watch numerous Arcadia videos at marcmassive's youtube space, like this interview with Paula Yates. in which Nick seems to be paying homage to Simon's Hungry Like The Wolf look.

Meanwhile, back to the future, Duran Duran ...

First, they have a new song out - a version of Instant Karma (at iTunes US) on the new John Lennon charity record. More importantly, their album is due out in Fall and has a good title: Red Carpet Massacre. Clever boys.

They played potentially meh new single Nite Runner (click that to hear it) at the Hammerstein Ballroom in New York a few weeks ago, but not (as rumoured) at Live Earth. By now most trolls know that Justine Timberrod and Timbaland worked on the CD - oh dear - as did Nate 'Danja' Hills. Sounds like an R'n'b Massacre to me. Whatevah, cuz Simon looked good in the studio (at almost 50 years old!): 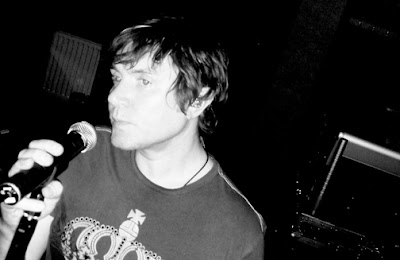 Their frequently updated website lists some of the other new songs: Skin Divers (with, barf, Timbaland), Red Carpet Massacre, Box Full o' Honey (ewww!), Last Man Standing, The Valley and Falling Down. I'm nervous, but I'll give it a fair shake as their last one Astronaut had some fine moments.

Finally, a bit of D2 trivia: Think we're all getting old? Catch this... the Duran children:

Very nicely written, XO! The mere fact D2 is still around making good music and sounding great live is proof they are one of the bestest bands around!

I probably played "Election Day" a zillion times more than any other D2 single after "The Reflex".

Oh, we were on the same wavelength... I just caught the "Nite Runner" clip from NYC yesterday and was gonna do something on it. I actually like it, though. I think it sounds very No-No-Notorious-Notorious-era DD.

I have Arcadia's album on cassette here somewhere. I should play it to get re-aquainted with it.

Why do you think Andy's Creepy?

This made my month XO! Could Arcadia have been the best pop band of the 80's? An overlooked gem because of a name nobody remembers, for sure. I LOOOOVVVVVVEEED this album back in the day. I spent hours trying to figure out what all those damn numbers on the sleeve meant (How very clever they were to use codes).

The Promise is beautiful, but I would submit Election Day to be one of my top 5 singles of the 80's. There is not one weak song on the album. Missing is the most beautiful song Simon LeBon has ever sung. How can you go wrong with guest spots from Sting and Grace Jones? The production is FLAWLESS. It was also one of the last things produced by the legendary Alex Sadkin before he died suddenly in a car crash. He was previously so instrumental in sharpening up the Thompson Twins sound. I was always more into Arcadia than PowerStation (no reliance on cover songs here). The whole image was a million times better as well.

The only drawback is that it wasn't LONGER, as they had supposedly recorded enough material for a double album that still remains unreleased. (I found a 45 a couple years back for The Promise that had a nice 5 minute version of the Japan influenced instrumental Rose Arcana on the flipside--much nicer than the barely-a-minute album versh). They did have a great followup single, Say the Word (from some forgettable movie called Playing for Keeps) that is absolutely ACES. Wish EMI would do a remastered package with all extra and unreleased material collected. Is 22 years too long to wait???

Flame, Goodbye is Forever, Keep me in the Dark, El Diablo...I'm going to listen NOW!

One of my wife's friends from high school still uses Lady Ice in her email address TO THIS DAY...

wild kind of look to the day. is that it?

Anyway, I don't have Say The Word. Boo you whores!

thanks for this post! Lots of vido goodness I need to check out.

Actually John does have a daughter with his first wife, Amanda de Cadenet -- Atlanta, born March 31, 1992.