Whoever shouts the loudest gets the most attention 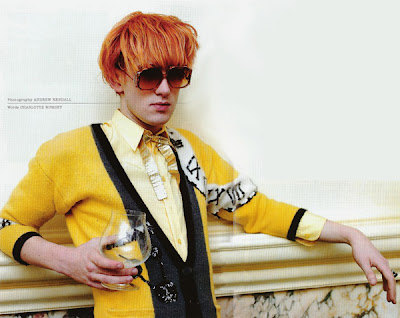 Yeah, so Patrick Wolf stirred the shit on his messageboard* yesterday by announcing his retirement from live performing and interacting with fans. He seems to be living out the final verse of his song The Libertine. There is a thread of blame placed on his fans in the post. I'll ponder this a bit and comment later. Suffice it to say, I do not share the "Oh, we are to blame!" emotions of many of his fans. I also don't really believe that November will be his last show. Wonder what his American label thinks? They launch his CD in America on May 1.

Love those glasses though.

*I don't even feel like linking to it, honestly.
Posted by xolondon

If there's one singer who'd be able to throw it all away on a hissy fit, it'd be him. His hypersensitivity has always been his most endearing trait of character. His off-putting (if that's a word, unless I mean stand-offish, I don't remember :) persona being the least endearing.

So I think he definitely could just end everything in November, although six months is an awfully long time and I'm sure his manager (much more down-to-earth than him :) will make everything she can to get him to change his mind.

Bonjour Pierre, author of my fave French blog I cannot really read. ;) I suppose even if PW did follow through - and I bet he will NOT - that he'll still put out discs. The question is economic: will a label, in this day an dage of music biz, promote an artist capable of great shows but unwilling to do them?