This is not Tori, this is Clyde. 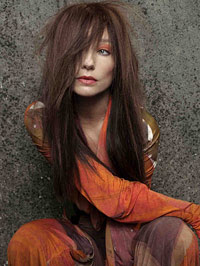 Say hello to Clyde, who "wears her emotional wounds on her sleeve, but remains idealistic." Clyde and I could drink margaritas together because she "is dealing with having been disappointed in her life." Chin chin, Clyde!

Clyde also appears prone to overdoing her makeup and wearing wrap dresses. She's one of those women who really needs to cut their hair. She is also probably good in bed and she's the type to cut people some slack, if you read the bio on her blog.

You can listen to 30-sec clips of all the songs on Tori's new American Doll Posse. It sounds like... a Tori record. More variety than the last one. Clyde sings Girl Disappearing and Roosterspur Bridge.

Don't worry, I will grow weary of this, but for now, color me amused. Source
Posted by xolondon

Oh that Clyde Blog thing is so so pitiful. I love Tori's music and have a ginormous stack of her CDs but the woman can talk some serious nonsense, can't she?

Love both the 2 full new songs I have found and this album is shaping up to be rather great.

Thanks again XO. After hearing a clip of "Big Wheel", I was REALLY cautious about this album. Way too Glenn Frey-meets-Lynyrd Skynyrd-in-the-80's-sounding to me. The clips of the other songs are much more promising. She still wants to rock out like it's 1972 (Led Zep influence?), and there's a bit of 70's lite FM sheen on the whole thing, but the songs seem more unique than Beekeeper's ("Programmable Soda"? WTF? This album's "Orange Knickers"?) Once again though, as with the last two albums, there are way too many songs, a silly complaint I know, especially as a fan, but it is hard to sit down & listen to an 80 minute record in its entirety every time.

Unfortunately, since people don't buy singles anymore, some artists now feel compelled to include every fart so their vision can be clear and songs won't be missed when they used to be relegated to B-sides. Why does the label keep giving her carte blanche when it comes to putting these projects together, especially after her sales steadily decline? Supreme overindulgence from an artist I used to love, to be sure. What happened to the woman who recorded Venus, Choirgirl Hotel, & Pele? Those were edgy lyrically, but SOUNDED edgy as well. Her recent albums seem to have all the corners smoothed out.