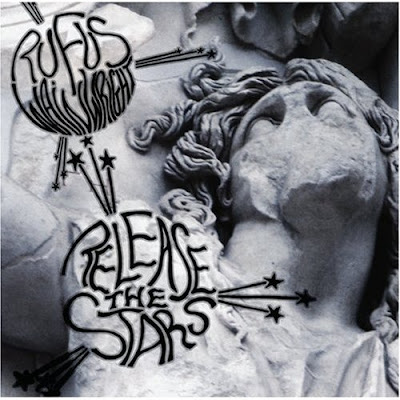 I had planned to hold this review until next week, but then the record leaked, so here are my thoughts...
What becomes a legend most? Rufus Wainwright had an idea when he recently said, “This is as strong and magnificent and young as I’m ever gonna be all at one time.” In a typically Bartlett’s-worthy fashion, Rufus is promising that his fifth album, Release The Stars, is nothing less than mega. The aural equivalent of a Fabergé egg. I actually think the above comment better fits 2001’s Want One, my choice for his magnum opus. That album was a swirling storm of thousand-overdub vocals, strings and horns and its quirky twin (Want Two) was a weird collision of avant garde (Old Whore’s Diet) and radio pop (The One I Love).

What keeps Release The Stars from achieving Want One legend status? Not much except for the fact that 1) you cannot ever truly relive a Moment and 2) Stars is a slightly quieter affair than I'd imagined from his own descriptions. The opening track, Do I Disappoint You? bears the chorus, “Why does it always have to be fire? Brimstone?” The answer is that it doesn't, though over-the-top, grandiose pop music has always been Wainwright’s forte. Stars is more subdued. It is buttressed by a trio of gorgeously over-the-top numbers, including that first song, but it’s also his most chilled out, calm record since his 1998 debut.

Debut single Going To A Town is a fine example of restraint: a quiet, disappointed protest song that sounds like early Elton John. It has a classic melody and a simplicity that is actually present in many Rufus songs, but not something he's noted for. To call the track anti-American would be simplistic. It's about trying to live through a time in which things you once counted on as good are no longer that.

Nobody’s Off The Hook might slip by on first listen. A beautiful string quartet piece, it’s dedicated to his longtime friend and guitarist Teddy Thompson, who’s apparently “become the one desire in every woman’s heart” while “hanging with a homo and hairdresser.” For me, the arrangement evokes 1950’s New York on a damp Sunday afternoon. That’s Rufusian skill. Many will read my description and say, “Err, what?” but his songs often connote something very specific to the listener.

The album’s centerpiece, Between My Legs, begins as a jaunty pop/rock number (fans, think The One I Love), but at 2:42 comes a middle eight that never actually ends. The song transforms into something entirely new as Rufus sings about an underground river escape, with I Claudius actress Siân Phillips reciting the lyrics in a recitation so dramatic it makes Lady Macbeth seem like Florence Henderson. It’s a testament to Wainwright’s comfort level as an artist that he gladly hands over one of the most glorious moments in his musical career to another vocalist, the same way he might cede to a French horn or chamber quartet. He’s still the star of his show, but he’s sharing. If fans are going to have a Big Gay Moment on this record, where they finally lose their shit and start running around screaming, the last 90 seconds of this song - complete with Phantom Of The Opera crescendos - are sooo it.

Each Rufus album has a piece of pure theatricality: last time it was Little Sister and here it’s Tulsa. In two short minutes Rufus remembers an evening spent in rock star mode with The Killers' Brandon Flowers, a human mix of eyeliner and conflicted Morman values. This is the kind of song that will make fans shake in ecstasy and bystanders plug their ears. It's hardcore Wainwright, complete with cutting wit and nasal vocals.

The much anticipated Sanssouci is one that disappoints. After all, the song is embodied in this lyrical gem: Cupid’s rings have cobwebs rings. Had I written that line, I’d have taken all my friends out for drinks [in Paris], but the musical arrangement just doesn’t touch the imagery

Other tracks, like Tiergarten or Rules And Regulations may grow over time. The only moment that pushes too hard comes toward the end of Slideshow, when Rufus invites in guitarist Richard Thompson for an ambling, electric guitar solo that Rufus proceeds to slash with sharp jabbing strings. Vocally though, Rufus has never been better. Slideshow has a chill-inducing ending where he quietly sings "Do I love you? Yes I do” with no sense of drama, just honesty. Likewise, Leaving For Paris is all hushed vocals against classical piano. It’s a delicate green leaf of a song. There’s more vocal subtlety on this record than ever before.

The blowsy, horn-laden finale, Release The Stars, does just what its title promises. He’s done nothing quite like it. With its "Old Hollywood" setting, the song sounds like something Mae West might have played on her iPod as she flounced around her boudoir, securing her mammoth bosom for an evening out. It’s celebrity skin at its best and as big as Rufus gets, with great details, like the gorgeous July 4th moment at 2:26 where the orchestra sounds like a swirl of stars / fireworks falling to the ground.

Ultimately, Rufus Wainwright is so gifted that he’s able to toss off genius moments without exploiting them or dragging them into tedium. Where his previous two albums seemed to be perpetually climbing the ladder [gasp] to the mountain peak of the silvery cloud [gasp] of the impossible dream [gasp], Release The Stars is more subtle. If Rufus doesn’t always make it pop like I want it too, he’s not gilding any lilies either. Legends don’t need to, do they?
____________________________
Perhaps I haven't told you 1,000 times to watch out on May 15 for my Instinct Magazine interview with Rufus?
Posted by xolondon

I love your description of Going to a Town... "It's about trying to live through a time in which things you once counted on as good are no longer that." I frequently feel that mixture of betrayal and patriotism in the day-to-day life of being an American.

I have no idea why you're not still happy with this review because it is so many lovely shades of great, or 'legendary' as I mentioned a while back ;)

I have to review this album by next week here in Oz and I've no idea what I'm going to write after reading yours. My first draft is no longer useful to print xo!

Even though the album has leaked I haven't heard it yet. But your review has already filled in some aural gaps, which is clever!

Which tracks did Marius De Vries do, and can you hear the influence of Neil Tennant? And did he have any solo production credits?

sozz. Did RUFUS have any solo production credits?

Rufus produced the album himself, completely. Neil's role was like an editor/ commentator. I don't think he was there much for the actual reacording. Marius mixed it but does not have a producer credit. It's unadulterated Rufus, with comments from trusted collagues.

PS Adem, You know, it's just that whole "it could always be better" thing! :)

Well, now that someone sent my advance promo back, I can finally listen and apply the subtext of the wisdoms of XO upon hearing it ;-)

I am so looking forward to the release of the album next month, but it's so hard to be good and resist the temptation to get the leak. Definitely looks like a more quiter affair this time around.

Not everyone will agree that it is quieter this time - I guess there are like 5 songs I would call "BIG" in the Beautiful Child kind of way. Many are more like the tempo of 11:11.

Wonderful review. Curious to read what he told you about Brandon:)

Having listened to the record a few times now one line of your review really stands out for me: the ungilded lily. It's a great album for sure, but it sounds very unfussy in the production, as though when he wrote the songs on the piano, they almost could have remained that way.

Nice review XO. Release The Stars is gorgeous album. Definitely one of the best records of the year.
Between My Legs, Do I Disappoint You, Sanssouci and Going To A Town are my favourites.

By the way, the album features guest star Joan Wasser called Joan As Poice Woman. Joan is perfect musician. You have to listen. I guess you love her.

Where the hell was I when you wrote this?! Having listened to nothing but "Release the Stars" in my car for the past two weeks (having secured an advanced copy), I love it. If it weren't for "My Phone's on Vibrate For You," on "Want One," that would definitely be my favorite, but "Stars" is definitely in first place. The "big gay moment" made my jaw drop - in disgust, rather than awe. His sample of Bolero was so much more effective than the cheesy Phantom synth. :( I love that you mention both "Beautiful Child" and "11:11" in the same response earlier; they're my favorite songs from that album.

I am still on Team Sian though...