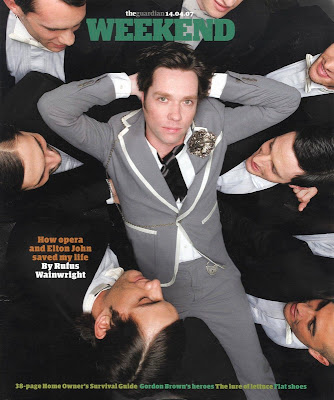 There have been lots of quotes swirling around the Interwebs about Brandon Flowers' effect on Rufus Wainwright. You have not heard the end of that subject. The quotes I got from Rufus about LaFleur are better than those, but - cruel tease! - you have to wait until mid-May to read them in the June issue of Instinct Magazine. Something to live for. Oh, I've become a media whore...

Pretty lush picture of Rufus above. The new Guardian Weekend interview is a juicy read. Rufus announces that he's monogomous "at the moment" to his boyfriend, Jorn, who is German, 6'7" - and "everything is proportionate." Listen faintly in the distance and you can hear the Guardian editor orgasming. Much of what Rufus says comes with a twinkle in his eye, but you also have to note that he often says things about himself in public that most people would not - like how unsafe he was sexually in his drug years. He tells a story of having sex with a straight(ish) Irishman who would go for a round and then "deck" him before they'd have sex again. Healthy! This was in 2000, pre-rehab.

I am such a fan, but sometimes there are things he says that I find... tiresome or in bad taste. Not hurtful, but very self-involved. His candor is refreshing in an age where celebs are trained to say nothing. If he feels the freedom to say them, everyone else should be able to say, "Oh. please, Rufus."

Whatever, I do love his message for George Bush in this article: "Get that fucking smirk off your face."

You can sample 3 new Rufus tracks - or parts of them - on this e-card.
Posted by xolondon