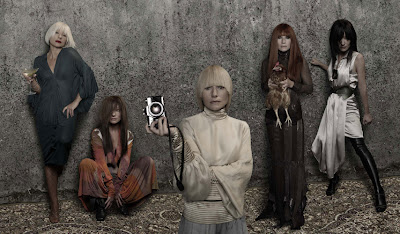 These strange little girls are the posse of singers on Tori Amos's new album, American Doll Posse. These girls sing the songs, including some duets, mmm'kay? They even write their own blogs. It's like American Girls high on acid and Paglia.

Tori just gave an interview to Starpulse about the album and there is a lot of talk about the "compartmentalized feminine", Dionysus and - err - a "casual approach to rubber."

Tori tells Starpulse she will appear on tour as a different girl each night at the start of the show: "I love the idea of this multimedia project being improvisational. Improv in front of a mass audience…this allows the five women to explore and develop as opposed to them being restrained and contained in a portraiture medium."

I know, I'm such a philistine, but has Tori lost her mind(s)? I'm trying not to be a crazed fan, who gets all nutty and overly negative / positive about an album before I have heard it. These reports are just a bit... Sybil. Many of the problems I found with the last record - too many songs, constricting high concept - seem to be repeating here. One thing seems fairly clear: the abum has more guitar and potentially more pep, so it won't be as meandering as the last one.
Posted by xolondon

I love how Tori has morphed into her very own Harajuku Girls...

And when you said Sybil, I got excited, thinking you meant this Sybil.

I think it's all really quite awesome.
I was always fascinated by that book "Sybill" (a/k/a Shirley Mason).
It's like admitting that the different parts of our brains can pull at us as people and as a society like strangers inside each one of us.
Yet something unites them...

I really want to like this album. It may seem premature, but does something smack of familiarity a la Strange Little Girls here? And "Big Wheel"? I'm not feeling it. It's like an American country hoe-down. Has Tori's quest for her own non-Kate Bush-inspired voice brought her to southern comfort? Not sure she is the artist I used to think she was. What happened to the woman who made Choirgirl Hotel & Venus & Back? Even a Pink/Pele would do. This just seems like more Beekeeper. I kinda enjoyed Scarlet's Walk, but the indulgence factor continues to grow.

It's one thing to recapture your 'angry' element, but it's another to do it sounding like the O Brother soundtrack. Guess I'll have to look to Nine Inch Nails to find the anger--sure sounds like Reznor is finding the plot again, unlike some. And I can always count on Bjork to be a bit wacky.