A little bit Tower Of Pisa 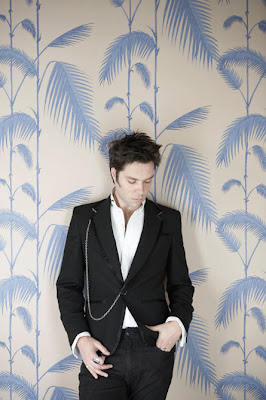 My big reveal: After a few weeks of queasiness and scheduling mayhem, tonight I interviewed one of my favorite artists, the wunderkind Rufus Wainwright. I did this for Instinct Magazine: a very speedy 15-minute phone interview in which we managed to cover all these topics: whether or not he coined the term "bussy" (boy and pussy), Liza Minelli's reaction to his Garland shows, Neil Tennant's role on his album, lederhosen (the quotes on that are hilarious), Brandon Flowers, his message board, the upcoming True Colors tour with Debbie Harry, the amazing appearance by Sian Phillips on his electrifying new song Between My Legs, his lack of dance mixes, and the current "rehab zeitgeist" (my phrase) that's going on in America.

I was fine enough- the call took place about 30 mins early, which was probably good. One does not love sitting by the phone waiting for an icon to call, does one? I was shaky, literally, in the first moments and it got better after that. I'll give more comments when I have "processed" the experience and, of course, full linkage and actual quotes when it is ready to be published. Regardless, I was pleased: Rufus was very sweet, articulate and clever. He is an incredibly savvy interviewee... quotes flying out the bussy.
I'll be posting my thoughts on his new album, Release The Stars, which is very good. Be sure to buy his new single Going To A Town now on itunes. It's an ambling, heartfelt protest song about conservatism in America and our current place in the world...the subtitle might as well be I'm So Tired Of America (a repeated line). The line that sticks out for me is "Tell me, do you really think you'd go to hell for having loved?"
Pic by Ellis Parrinder. Thanks to Editor RD and Miss Tang for the hookup!
Posted by xolondon

VERY looking forward to the finished product xo, especially to read about Liza's reaction to his Judy show. My best friend Ben & I were actually discussing this just two nights ago and had both wondered what she actually thought of it!

Looking forward to reading it!

What? Sorry, I was scratching my bussy.

can't wait to read the article! congrats on the scoop!

haha, well done you :) how exciting!!

What wonderful news; I'm looking forward to reading this! Also glad you asked about Neil Tennant, and that the album is so good.