It's gotta be strange twist of fate 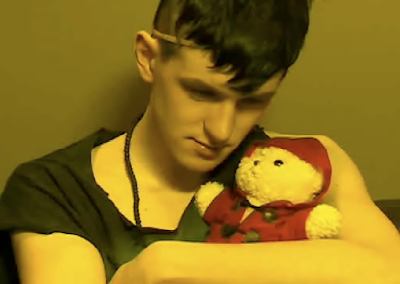 What a week it has been already. I've been busy, man. You know... fuckin' for tracks.

I promised a pic of Patrick Wolf's new hair and that is it above. Ironically he was saying that he finds it creepy when adults hold stuffed animals.

A recent visitor found my blog with this fetishistic Google search

I am lovin' the nicknames for this year's American Idol crop: Melinda is Sista Shrek, bless her, and bald Phil is Philferatu!

Slant has a piece on Madonna's Erotica album, revisiting it with a new review. I've had an idea for awhile of doing a week of posts as if it was a year like 1992 and this makes me think I should do that sometime.

The Killers have a new song, Move Away, that will be on the Spiderman soundtrack. Surely a Culture Club cover. But not.

The lack of Bjork leaks makes a point about record companies having more control than they exercise. That single is due out Tuesday and most people have not heard anything more than 15 seconds.

Jeff Buckley Best-Of-CD coming out in May

I am a wee bit umoved by My Beloved Mutya's new solo single, Real Girl. That Lenny Kravitz track was a high point of my hawt summer of '91, but it just seems a bit obvious/safe as a sample. The chorus doesn't even sound like it's in her key. Still, it's a likely hit.

Torr goes off on Robert Smith, who continues to wear that stupid hair and stupid makeup, bless his bitter heart.

I believed every April Fools joke out there (the Bjork, the Hype Machine one, all of it). I am such a sucka. The best one was Depeche Mode's elaborately done Dave Gahan restaurant. Sorry Varant, I would have gone there with you!

Out Monday in the UK: Lucky Soul's debut album with its gorge cover. Review coming soon.

Tonight at the gym I almost got off the treadmill, I was so not into it, but then I had an Olivia Newton John moment that woke me up: Xanadu, Twist of Fate and Livin' In Desperate Times. How brilliant! The middle song has aged quite well!
Posted by xolondon

While I found the Dave Gahan restaurant prank amusing because of it’s detail but Depeche fans, some of whom are in a fuss over money immediately doled out to visit NYC to visit their idol’s new venture, really should know better by now. Last year the DM site claimed The Cure was suing DM over cover art and stated Fletch was appearing in Playgirl the year before so you would think hardcore fans would remember to be cautious around this time of year. I guess extreme devotion cuts off some reasoning skills but even my buddy who makes a conscious effort to avoid them knew it was a fake from the menu.
A week of '92 sounds brilliant!

I was totally fooled by the DM menu story, but had a good laugh on Monday when they revealed it was a joke.

How hot would that be if "Move Away" was indeed a CC cover!?

My friend Christa just made me a mixed CD called "Fuck For Traxxx."

I fixed my typo. Am sure there are more. Le sigh.

I think Patrick looks more pedestrian with that hair... Sigh.
I didn't know you were into sock worship. Be proud man!
I look forward to your 1992 piece. Don't forget to include Body Mind Soul by debbie gibson ;)
Everyone and his mom are on the Spidy soundtrack...
Gotta love a bit of ONJ!!

1992? Has to have a bit of En Vogue in the mix... And my iPod shuffle mixed Thief of Hearts as I read your post (love those type of musical coincidences): "Smmmaaash! Bitch!". Camp as tits.

i cut my hair like that once, listening to angry loud screamin lesbo rock :D

There's some weird 'Erotica' thiiiiiing going on. I listened to the album by total freakish coincidence earlier in the week because I was yearning to hear 'Bad Girl'. I guess I smoked too many cigarettes that day.

The DM bit was funny (the menu and all). I thought opening up a whole myspace account for The Bitter Apple was a bit much.

I heart all those ONJ tracks you mentioned - esp. Livin' In Desperate Times. Because, you know, being alive is her only crime.

And the vid for that one! I don't think there was a single 80s cliche that ONJ (bless her heart) didn't fall for hook, line and sinker.