I could watch this all night. 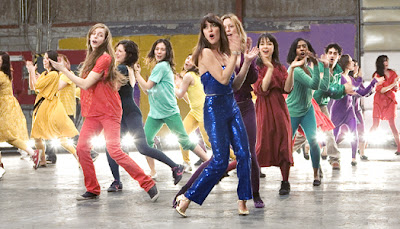 For about a month I have been playing (Leslie) Feist's song 1 2 3 4 on a loop. I can't believe I didn't put it on my playlist a few days ago. It's the most exuberant song on her kickass new album The Reminder, which is out May 1.

Now Feist has done one of the best music videos I have seen in ages. I didn't think she'd ever top her video for Mushaboom (watch it) and now she has. It makes me want to sing and dance and be a pop star rather than write about them. We need more artists who - like Leslie Feist - mainline joy.

I love that you hear what's happening live as they film the video. Notice that it appears to be one take - that is until a sly twist at the very end. How did they do that?! Watch below...

Be sure to read this new piece on her in the Times Online. Did you know that Feist was Peaches' roommate for many years? Peaches is actually in the Mushaboom video, dressed like Stockard Channing in Grease!

Feist 1234 get it via Shameless Complacency

my apologies to Pitchfork for totally ripping them off!
Posted by xolondon

Email ThisBlogThis!Share to TwitterShare to FacebookShare to Pinterest
Labels: Feist

Totally Awesome. Can't love her enough.
I'm also eagerly waiting for the My Moon My Man video. It supposedly will also have some dance routines with dancers in flight attendant costumes!
The album, I still keep it on hold though. I tend to step back whenever an album/artist gets overhyped, for fear that it wouldn't come up to my high expectations. Maybe I'll wait til the street release date and have a listen at once.

I personally think it's a stronger album than her last. It has a few cringey moments (her lyrics tend to be either really sharp or kind of trite, sometimes in the same song), but she is so good at a "mood" on a song. Her voice is just phenomenal; she is underrated in that way. She's like a chanteuse who decided to do indie pop rather than standards.

See, now THIS is the kind of odd-popstar-in-80s-outfit-doing-exuberant-slightly-unschooled-dance-moves kind of video I can get behind.

I learned of Feist through a free weekly download on iTunes, "One Evening," and I loved it. I never think to look for videos on YouTube, though. Thanks for the introduction to visual Feist!

I may have to nick this for my place.

I always troll around Youtube looking for videos. Of course, Sumner Redstone may kill all that fun, old fucker.