Heroes of The Week: Sheryl Crow and Laurie David 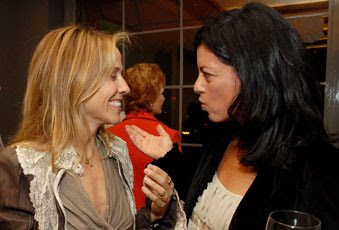 Am going off topic now! Last night at the White House Correspondents Dinner, here in DC, Sheryl Crow and Laurie David (wife of Larry, OMG!) spoke to Karl Rove about global warming and to say it didn't go well is mild. Here is one scene:

In his attempt to dismiss us, Mr. Rove turned to head toward his table, but as soon as he did so, Sheryl reached out to touch his arm. Karl swung around and spat, "Don't touch me." How hardened and removed from reality must a person be to refuse to be touched by Sheryl Crow? Unphased, Sheryl abruptly responded, "You can't speak to us like that, you work for us." Karl then quipped, "I don't work for you, I work for the American people." To which Sheryl promptly reminded him, "We are the American people."

Read the full story from them at The Huffington Post.

If these two women can make Rove that tense at a function like this, then he is a heart attack waiting to happen. He clearly doesn't encounter enough opposition in his daily life to know how to handle something relatively benign. He really is one of the most destructive individuals ever to see foot in the White House. Mark my words, the presence of Sanjaya Malaki will be the story the media reports, not this moment.

Picture from Self Magazine's blog
Posted by xolondon

Holy crap - it's just another in a long line of examples of how out of touch with reality this administration is. I'm speechless.

Wow. Talk about clue cake. And they're running our country. FABULOUS.

I will be going back to my fictional reality, now. This real life stuff is too scary.