For today I am a wild creature 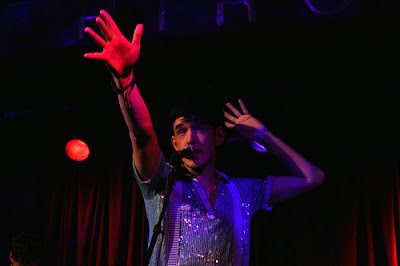 Patrick Wolf's New York show at Misshapes was reviewed by the New York Times. Did you hear what happened? Let's just say it's something he'll want to forget... Fan cracked-lcd318 reports:

The drummer was really fucked up on something and stopped playing during the libertine, i think. he was just staring off into space for the longest time, it was really creepy and kind of disturbing.... patrick and the viola player started smacking the hell out of him and Patrick hit him with a drum+drum stand
and then told him to get off the stage and that he was fired....he tried to get back onstage and talk to patrick but he wasnt having any of it and the security guards took him offstage. but they went on without him and it was great regardless, at the end several people jumped onstage and were dancing.

Disappointing. Look, they are young and I do love him. He seems like a good egg and is no doubt uber-talented, but if he doesn't manage his gift tightly - and this includes the caliber of people around him - shit will go down. See pics of it among the shots on JunkMag

In brighter news, cool indie blog Lycanthropy is hosting Patrick's new b-side for the 7" of The Magic Position: On Sussex Downs, a beautiful, beautiful cover of a Larrikin Love song. Get it fast - it is one of the best b's he's done yet.

The amazing photo above is by thatgreenplant. Well done! Below is a film of PW singing Tristan live at Hiro in NYC on the 5th.


I am fucked and I am fucking too!
Posted by xolondon

Aw, Patty! I was downhearted when he didn't play Libertine when I saw him live for the first time, but to hear it start and then descend into a beat-me-up circus would probably be much worse. You can't get the staff!

There is a version of Umbrella without the rap! It's so much better! The song wouldnt sell in America if it werent there!

That's actually really funny. He does watch his pennies that boy, so to have such a skeleton band and have one of them fuck up... no wonder he lost it.

After seeing the Charlotte Church TV appearence, however, nothing surprises me about that boy these days.

thanks for mentioning my blog!!!

You are the main man for all things Patrick.