Everything went from wrong to right 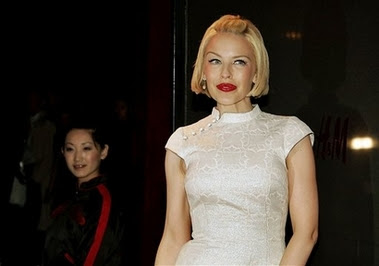 Kylie has turned into a wax figure! She doesn't look real there, does she? That is her in the flesh in Shanghai. That's nice, but shouldn't she be shooting a video or something? Bring on a summer single baby!

Looks like The Feeling has just not gone over in the US. Last fall I thought there was hope, but the CD launch here was rickety (see the awful new cover). I really think record companies need to rethink how they launch albums in a globalised, high-tech marketplace. Although artists cannot be in more than one place at a time, worldwide release dates are optimal.

I also think international (music) trade laws need to be dealt with. We are fast headed to an Internet only age and labels/publishers have GOT to make it possible for me to buy music from iTunes US, UK and.... Sweden. Yes, I know 7 Digital is an option, but I don't want to mess with WM formats (and lowqual at that).

Full Rufus Wainwright dates for the next 2 months. I want a proper DC show! Not a True Colors walk-on! My review will be up in the next two weeks.

Do we call White Stripes Pearly Kings on their CD cover? It looks like that.

I've been digging the final season of The Sopranos. My favorites eps? The whole first season (and yes, the Meadow-and-Tony-look-at-colleges ep!) and more recently the one where Carmella and her friend went to Paris and did what everyone does in Paris: be overwhelmed by (manmade) beauty and end up ruminating on the choices one has made in life. By the way, my Mob Nickname is The Merciless.

So Madonna is working with Justine Timberod. Do I even need to say what I think of this? I've said it before, I like the Justin of LoveStoned/I Think She Knows, but not his other songs. I really doubt her album will be hip hop though.

Off topic: Did you know that from October 2006 to March 2007, 532 American soldiers were killed in Iraq and that it was the deadliest six months in since the war began? Anthony Zinni was great on Meet The Press this weekend. Take five minutes to watch his excellent performance.

Owch. American Idol was so painful tonight. Melinda sounded and looked great though - much younger and more chilled than before. Blake - When The Stars Go Blue should be attributed to Ryan Adams, not Tim McGraw!

Popjustice got a makeover. Did you see it?
Posted by xolondon

God, everyone's in a fuss about Kylie's look in Asia last week. I just chalk it up to the fact that her hair's still growing back, and there are limited options of what she can do with it till then. It's probably in that "awkward" phase, where you just wanna either chop it off or have it be full length already.

Totally concur on Kylie: let's hear some of this music already!

Plus, and I know this is a sensitive topic/area but is she looking a little more... heavy busted lately?

I very much agree about the trade laws. I do use 7Digital and a few other sites (I'm not a big audio quality buff--128 kbps is fine for me), but for most countries, there's no digital music option. I can somewhat understand the argument that it would hurt artists who want a phased release, but surely there's got to be a way around that? Maybe it's just, as you said, moving towards worldwide release dates. At the very least, there are some albums that are never going to be released in the U.S., especially those several years old.

Nothing new here that hasn't been said before, but it's something I'd love to see happen. I'm particularly in a mood about one of my favorite digital music sites actually moving in the opposite direction and no longer allowing US customers--I mean, why? Maybe threat of action against them...I don't know.

I think that is just the dress, Tricky.

Poster Girl, we should be hired as consultants to tell labels what we expect.