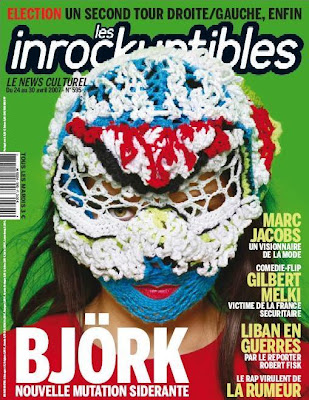 Bjork talks to The Guardian

Bjork talks to the The New York Times

Her interviews are interesting because it's hard to reconcile how she sounds and looks with her words as they appear in print. They often read as very normal, frank and clever in a way I don't quite associate her. Not that she isn't those things... Take this quote from the NYT story:

It would be too easy to walk away and say, ‘Oh, I’m just going to do these ornate objects that only a few people, blah blah blah,’ ” she said. “That’s just pretentious and snobbish.

See what I mean? Do you imagine Bjork saying blah blah blah? The cool thing is that the NYT piece has audio of her talking, along with song clips. That, my f(r)iends, is the wave of the future!

Note also that Bjork has a tour blog. She doesn't write it, but it's worth reading.
Posted by xolondon

I always wonder what Bjork and Matthew Barney talk about. The consistency of jello in art installations?

There is a documentary about the making of Drawing Restraint 9 - you can see them interacting. Mr and Mrs Barney only speak through coded physical movements designed to explore the ... errr... sensual relationship between creativity and self-imposed resistance. Yeah! That's what they do!