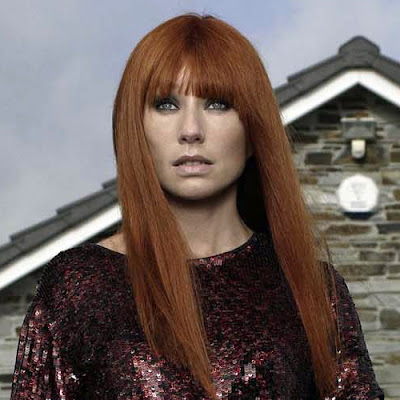 NOTE: No Tori MP3's here. Try Google Blog to see if you can find the clips.

So yesterday two song snippets (2 mins ea) leaked from the hysterically anticipated Tori Amos record. It's not that Tori has been away very long, it's just that her last album really was not very great. Some nice songs, but it was a meandering mess of an actual album (read my review from the early days of this blog). Too midtempo - her balloon had deflated...

And now we have Big Wheel and Bouncing Off Clouds. They'll be everywhere this weekend. I saw Big Wheel described as "honky tonk" which is fair, but it worried me that it might sound like shitastic Hoochie Woman! No. The easier reference is to say you can easily imagine Scissor Sisters singing it...it's very 70's Honky Chateau Elton. There is indeed a point in it where Tori announces herself as a MILF. Does everyone get that? It's code for "mother I'd like to fuck." There is also a breakdown where Tori calls out for drum beats in a countdown (gimme five...). It sounds like the song was developed by playing it live, but I don't think she has ever done it for an audience.

Bouncing is more me. Lush pop and a little closer to old Tori, maybe Bliss era, as electric guitars feature heavily on what I guess is the middle eight. Potentially epic! It's got a tinkly piano, a lot of bass and the same kind of surging quality as Taxi Ride (though nothing can touch that song). The notable hook is "It's not as happy as it feels." She always brings a good lyrical hook.

15 years into the Tori story and people still see her album releases as an event. Pop press shit all over her for "kookiness", but she's pretty fucking fierce and we need to hear that again in the music. Both songs seem to have more energy than her recent work, which is all anyone is asking for. There is an argument to be made that Tori needs a strong guitarist as a foil. Like Steve Caton - if you look at her work, it starts to get softer when he leaves. Anyway, I'm hopeful.

Still loving that photo above. She manages to be creepy and hot at the same time, smart girl. See tag below for more Tori...
Posted by xolondon

Perhaps you should look into why Tori's last 2 albums were mellow. She clearly explains this in interviews. She had a young child. I would think someone would change their way someowhat after this experience. To criticise other people's creativity is so easily done, but there are always differing opinions based on where a person is in there life.
Having been a fan of the music Tori creates for nearly 15 years, in all it's incarnations, I am still a big fan of what she does. The previous 2 albums that you criticise I find brilliant.
I have more respect for her for growing as an artist as well as protecting her child in her music rather than playing the same style of music all the time just to play what people expect.
This is what I hate about music, but Tori thankfully never compromised her artistic integrity.
Just my opinion.

So you read the post above and all you saw was the negative?

I will never be a fan who likes everything an artist does. I stand by my criticism, which was carefully considered. This makes me no less of a fan ("EWF") than anyone else.

Perhaps you should try out Charlotte Martin.

I can't say I'm a huge Tori fan, but I have listened to her stuff. The thing that's getting me about that photo is how very Annie Lennox circa Savage it is!