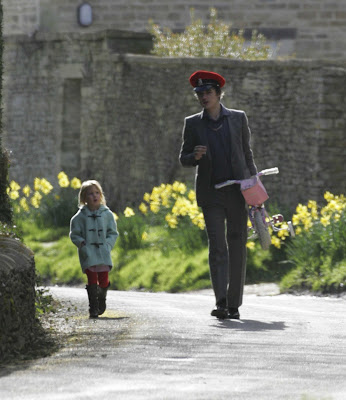 I am back after needing a few days to live my actual real life. That picture above was the final touch to this post: Pete Doherty and Kate Moss' little girl swanning around the Cotswolds (or is that actually Kate, finally shrunken from lack of food?). Whatever, that's some surreal shit.... but don't those flowers look lovely? I need some tea and a scone right now. Onward...


What happened to the planned remixes for Sarah Nixey's When I'm Here With You? Boo hiss, they never came out. The album packaging is deluxious though, with a coloured jewel case. Update (see comments): there will be remixes including a Lodge one, which is a good thing. The next single, Black Hit Of Space, will also have a remix and a "beautifully atmospheric SLOW version" of Strangelove...

Little Man Tate fulfills my need for a big, thick... British accent. But I only like the one song, This Must Be Love. I am still excited about Ghosts and have ordered their fizzy single Stay The Night, which I still do not have an MP3 for! Could care less about the new song by Arctic Monkeys. They're just too garage for me, that's all. Good lyrics though.

Yes, Wongie, Calvin Harris is overrated. That manchild has one song out (which I don't like), his album is 8 versions of said song and yet he has been declared a new genius. It's premature.

The Modern Music is a very interesting blog- the musical taste is broad and the broken English is endearing.

The new Yoko Ono project is fascinating. Seriously! The new version of Every Man Every Woman is something most pop fans would dig.

Madonna overtook Hong Kong (and now the world) like some huge movie monster. I love Hong Kong. I was lucky to go there briefly on two occasions and I wish more people could easily visit. It is beyond fabulous and great mashup of east and west.

Jam and Jerusalem is called Clatterford in America because we have crazy ass fundamentalists who would blow up BBC offices or something if the word Jerusalem was in a show title. It's the new Jennifer Saunders series and, so far, it is absolute shit. I hate hate hate how they've used Dawn French and Joanna Lumley, who seem to be performing in a crazy F&S skit, while Sue Johnston is actually doing subtle comedic acting. The show is decent in her scenes only.

Many thanks for The Modern Music and Bulut's vare, vare many and varied posts, esp. The Cocteau Twins. That track 'Iceblink Luck' brought a tear to my eye I missed it so much without realising!!!
Jam & Jerusalem... STICK WITH IT! Pardonez le pun. Everyone else thought the same but as the series ticks along, it gets better... but still not a 'classic'. Actually. It. Is. Rubbish.

Stick with it, but it's rubbish?

hey xo,
there will be remixes of Sarah Nixey's WIHWY (well, definitely one - with a Lodge one coming along later...). The single will also have a Black Hit remix and a beautifully atmospheric SLOW version of Strangelove... you can never have enough of a good thing... video v v soon...
best
ServiceAV

You know I don't do Big Hair for just anyone....

i am bored already of Calvin Harris
My Mika backlash may be kicking in
I owe you an email
Jam and Jerusalem is utter shit. Hopefully the show Benidorm will make it over there.
2 things went on sale to underwhelming demand today - playstation 3 and the madonna collection at h and m!

I NEED to get that Sarah Nixey record.

Just a guess, but perchance Hong Kong liked Madge's frenetic TV commercial a bit more than you did?