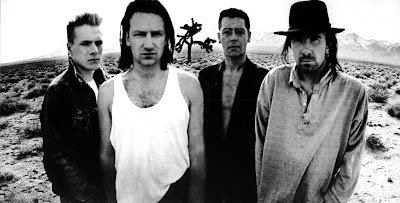 Twenty years have passed since one of the greatest rock albums of all time was released: U2's The Joshua Tree. I am pretty sure I got it on my birthday, one week later (you know, I was a very hip...errr.. 3 yr old). As overplayed as it was, I still love it. I won't do a big review here; most of you know this record. Here are a few facts:

1. The working title of the album was The Two Americas

3. Some people think it was supposed to be a double CD, but this is not mentioned in U2 By U2. Here is a website called Restore The Joshua Tree.

4. Here is a 7-min. video with the band and Eno talking about Where The Streets Have No Name. The album opens with that epic track and the video below, from the 1987 tour, proves that it's their most grand concert opener. Below is the first scene of the Rattle And Hum movie:

I tend to go back a lot to the album tracks that were not singles, like the gorgeous One Tree Hill (written for a friend who dies) and the ominous Exit, below. Film director Phil Joanou made the latter song an incredibly intense experience for the big screen. The yin yang is the heart of this tune: soft verses juxtaposed with angry choruses. And it's Bono at his best...

The question I ask now is why why why have U2 not seized this moment between albums to rerelease The Joshua Tree in a re-mastered special edition? The album had 7 b-sides, all high in quality: Spanish Eyes, Deep in the Heart, Luminous Times (Hold on to Love), Walk to the Water, Sweetest Thing (later redone), Silver and Gold and Race Against Time.

One Tree Hill, below, is a video outtake from Rattle And Hum movie. Bono was like a cat live, slinking across the stage. Or... undulating. He's kind of beyond the sexy now.

Finally, watch a very cool 4 year old singing U2 songs with a mic.
Posted by xolondon

Email ThisBlogThis!Share to TwitterShare to FacebookShare to Pinterest
Labels: 80's, classics, review, U2

U2 are another band that i'm not really into but have always sort of thought that I would like if I bothered to put some effort into it... hehe. Anyway, your knowledge of U2 is only matched by my knowledge of the soon to be 20 year old Out Of The Blue album by Debbie Gibson ;) hehehehe

Not only is Bono beyond the sexy, I wonder if he's beyond the singing. He does not sound like this any more. The last album was decidedly scratchy by comparison with the purity of his voice here.

By the time this album came out in the UK, U2 were very much a 'lads band' who all sported mullets. This album may have been huge but not with any a Pet Shop Boy fixated homo-to-be like me...
That's why I loved the PSB version of 'Where the Streets Have No Name' and why I loved the fact that Bono hated it...
PS Happy belated Birthday, mister!

I really hated U2 in this phase, what with all their Jesus Christ-posing. However, in retrospect, I now respect the Joshua Tree and think it is a really good album, especially all the non-singles as well, despite the fact it would take Bono a good 4 years before he would dress up as Macphisto just to tear down the uber-religious persona he created.

Why U2's albums have not been remastered and expanded by now is beyond me. Put that in the "what the..." category with the Smiths, Madonna(only the first 3 were done years ago), Prince, Springsteen, Chili Peppers, Nirvana, Pearl Jam, Duran Duran, Erasure, Yazoo, early Tool, Nine Inch Nails, Tori Amos, Sarah McLachlan, etc, and so many other 80's/90's superstars that haven't been remastered and expanded(thankfully the Cure, Depeche Mode, and REM's Warner years have been undertaken, but the list goes on & on--even the Beatles and many Rolling Stones albums can be included). U2 would be a great project for Island to undertake, and soon.

Count Popula, wasn't there supposed to be a 15th anniversary remaster of Nirvana's Nevermind out this year? What happened with that? Guess it's still early...

As for U2, well , I said it all in MoogaBoo and mine's banterview on them last fall...

But, I will mirror Phil in that when the Pet's "Where The Streets Have No Name (Can't Take My Eyes Off You)" came out in '91, I splintered off, but in the Frankie Valli & The Four Seasons direction, and sought out their Anthology greatest hits. Summer 1991 reminds me so much of listening to that CD all the time. I'm still a huge fan and think the Four Seasons are highly underrated in pop history.

But, hey, Jersey Boys is coming to L.A. this summer. Hoo-ray!

Hey Jason, haven't seen anything about the Nirvana yet, but when Cunty Love is involved, you never know what could happen. I did hear Beatles was supposedly happening this year from someone at EMI Capitol, but, as their company is in disorder, who knows if that's still on course.

Two more Depeche's came out this week though. BLACK CELEBRATION, FINALLY! YAY! (Construction Time Again is no slouch either)

countpopula: The first three Duran Duran records have been remastered (one really needn't go much further). No bonus tracks, however.