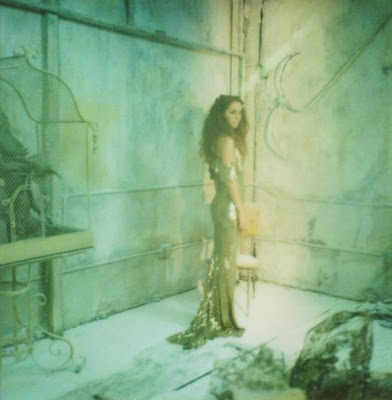 Pop music has a new creamy smooth pop goddess, she is 23 and her name is Siobhán Donaghy. A 2001 refugee of Sugababes, she has been toiling for about 3 years on her second album, Ghosts. Clearly, Siobhán has spent long hours lying on her floor listening to Cocteau Twins, Kate Bush, and Tori Amos on her big headphones. The record has a really wide scope, from the Kate-ish backwards trilling on the title track to the "swaying" pop of So You Say. Medevac swoops and pounds while our lass wails about being "strung out." My current favorite is the glistening folk/orchestral ballad There's A Place. This album is a pleasing combination of glorious pop laced with bits of Anglo weirdness.

She's in good company: Her main collaborator is James Sanger, who has worked with Keane, U2 and Brian Eno. Marius Devries also had a hand in the music. The album photos were done by Floria Sigismondi, best known for her work with Marilyn Manson. The video for first single Don't Give It Up was shot in Morocco by Sophie Muller. Money is clearly being dropped on this project.

I'll probably do a bigger review closer to the album release in June, but keep your eyes and ears open for the latest ginger superstar.

As for this album, what a goldmine of songs! My best friend Ben & I were listening to it last night and decided it was incredibly "witchy", but in a completely brilliant and legendary way.

I'm intrigued by the fact that Siobhan Fahey wrote some tracks for (with?) her.... how are those ones?

I did not know the Fahey connection! Really?

Adem I love your use of "legendary" and am afraid my brain has stolen that. All credit to you.

I found this song strangely appealing. I especially like the use of her vocal range in the chorus--how very KB. Must look into this now...thanks!

By the way, WHERE IS that Siobhan Fahey solo record??? Seems like an eternity. I guess it took a while for the Onetwo record to release (Claudia Brucken of Propaganda & hubby Paul Humphries of OMD--Martin Gore of Depeche Mode co-wrote & played guitar on a track).

This is from Wikipedia, so I would stake my life on it:

According to her website, Fahey has been writing for other people at the moment; these include (former Sugababe) Siobhán Donaghy, and Fahey also has a track 'shortlisted' for Kylie Minogue's next album, which is scheduled for release in 2007.

However, I do recall seeing this on SF's website in December or January.