Happy throngs, take this joy wherever you go 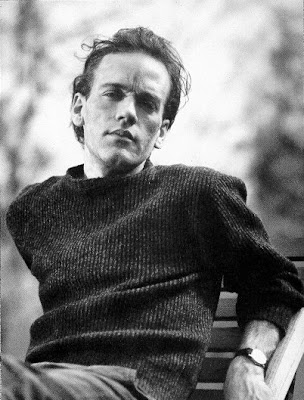 R.E.M. is inducted tonight into the Rock And Roll Hall Of Fame. This is really the first of my generation's bands to be inducted. I know the kids won't believe me, but there was a time, 20 years ago, when R.E.M. was the hottest band in the world - challenging U2, even - and Michael Stipe was the prettiest of all rocker boys. They had a truly extraordinary imperial phase that lasted for 9 years ('83-'92) and 8 albums. If you are a fan, be sure to look at this Online Athens (GA) special website. You can also listen to an interview Rolling Stone did with them today.

Here are some official promo pics from over the years... 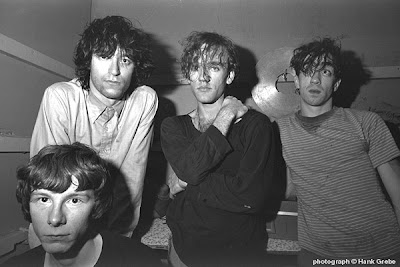 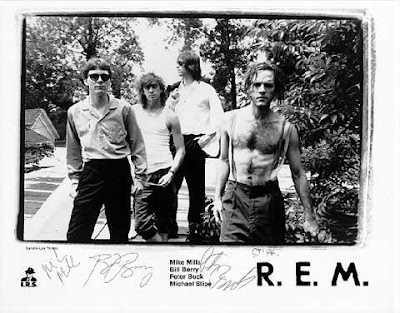 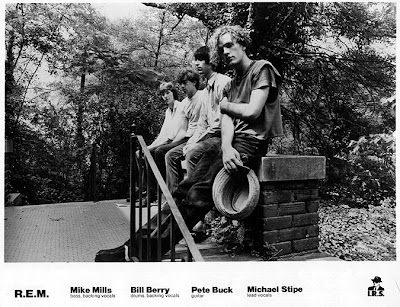 
Guilty admission: I have not bought and kept an R.E.M. album since 1992's masterpiece Automatic For The People. I never even heard the last album. The only one in the past 15 years that I can stand is Reveal (I still have that one). 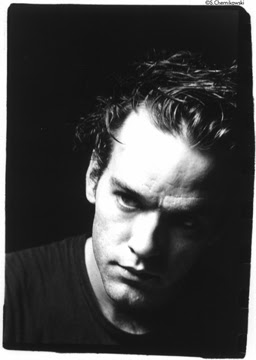 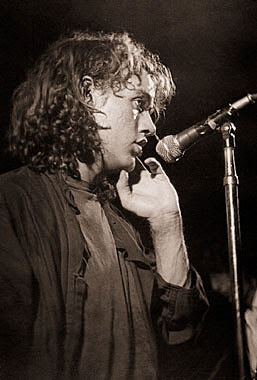 Xolondon's Top Ten + 1 Favorite R.E.M. songs, in no order:
Nightswimming
Losing My Religion
Feeling Gravity's Pull
Perfect Circle
Turn You Inside Out
Fall On Me
I Believe
Drive
Sweetness Follows
These Days
Imitation Of Life

"Green" is my favorite REM album. But I have a feeling that among the fans, "Green" is least liked. It isn't cause they were so popular then, but because it reminds me of my trip to Georgia so much. That and The Lightning Seeds - but that's another story.

I do love some of their early work though, my favorites being "Gardening at Night," "Radio Free Europe" as well as the ones you mentioned "Driver 8" and "Fall On Me" - How about "Orange Crush?" and .. that video. :)

Oh btw: I do agree about "Shiny Happy People." Most annoying. I guess that's what you get when you mix two of Georgia's finest. :)

UP is actually a really solid album, and my 3rd favorite after Automatic and Murmur. It sounds almost nothing like their earlier stuff, but I give them a lot of credit for reinventing themselves so radically after Berry left and coming up with something so original. Some of their best songwriting, too. You should give it another chance!

I know I'm completely alone in this one, but Monster is my hands-down favorite R.E.M. album. That, Madge's Bedtime Stories, the Pulp Fiction soundtrack and the second Cranberries album all came out around the same time and have a special place in the heart D'luv.

I got Green the Christmas it came out, but didn't like it much. I had Out Of Time, but thought it was only slightly better than Green.

I also think New Adventures In Hi-Fi is really underrated and has some great tracks: "Zither," "How The West Was Won And Where It Got Us" and "E-Bow The Letter."

I bought Up but sold it shortly after because it sucked. Reveal has a couple great songs -- "I've Been High" and "Imitation Of Life" -- and a lot of boring ones, though it's still in my collection.

P.S. I played "Leaving New York" off that last CD of theirs repeatedly during a week in New York in November '04. On the flight there, it was the day Kerry conceded the election.

One of my all-time favorite bands. Yeah, Nightswimming is their best stuff.

Okay, okay...we GET that you dig Michael Stipe... sheesh, enough already!! It's like someone's becoming verklempt in here already...talk amongst yourselves..

I remember being in Barcelona and listening to 'Electrolite' off 'New Adventures in Hi-Fi' and absolutely loving it. Agree with D'Luv on his picks too.

Also, in terms of recent REM, how about 'I'll take the rain' from 'Reveal'?

More recently though, it's gone to hell in a handcart. iTunes tells me I listened to 'Around the Sun' precisely three times. I just longed to engage with... something.

Finally, I am a tad surprised 'Find the river' didn't make the top of your magic list instead of 'Nightswimming'. That's the clincher on 'Automatic...' for me.

Re my faves - REM released Document my freshman year of college, followed by Green and Out Of Time, all during college, so that's why those are so big for me. Dorm life!

Richard, Find The River should be in my Top Ten, yes. I tried to play that album last night before bed and for the first time I can ever remember, I could not play something because it reminds me of something that makes me a bit too wistful. On another day it won't bother me, but I could not listen to Find A River last night. Sorry to be so obscure, but dot dot dot.

XO, I always really loved "Nightswimming" - it is far and away my favorite REM song that I can think of off the top of my head. The only REM album that I own (aside from the In Time collection put out a few years ago) is Automatic For The People. I have borrowed later CDs from the library. Monster comes close, but it's still nowhere near as glorious. One later track that I really enjoy is "All The Right Friends" - so much so that it made my list of summer songs in 2004.

It's funny how the music of our college years really does linger. My biggest regret is that grunge was so big while I was in college (90-95) but I still look back on most of the music fondly, even if I didn't like it much. If that makes any sense.

Today iTunes put up R.E.M.'s cover of Lennon's "#9 Dream" as a single. All proceeds go to Amnesty International's campaign to end the Darfur genocide.

God, has this government actually called it genocide yet? Probably not. Not on this watch.

Anyway, it's a great cover! The orignal always gets me choked up, and this one comes close... it's from a full album of John Lennon covers for the campaign, out in August. More info here.

Out in June, rather.

You know where I stand on this after all these years:

"It's the foolish woman who isn't in love with Michael Stipe"

I'll Take the Rain is probably one of the greatest lost #1 hits of the last 10 years. Why Reveal didn't get more exposure is bewildering. Imitation of Life makes me teary-eyed everytime I hear it. What a great album.

Around the Sun...not so much.

That being said, I can't believe they began 25 years ago. Guess it's been a while since they had a big hit. Time flies.

Lifes Rich Pageant was the most compulsively listenable album of the late 80s, every bit as much a soundtrack to life as the Beatles' Revolver was twenty years earlier. To me, it's the very best of what pop CAN be when it's a precise balance of melody and intellect. They're a thinking person's band. They took a century-old Civil War ballad, a snapshot of a polluted river, a bundle of quirks and insecurities, and made you think about history, ecology, love, friendship, betrayal, superheroes... and love the sound they were wrapped in. Infinite playability, someone said about this album... fifty or five thousand plays, you never tire of it and it never sounds obsolete.

That was the best comment I have read in ages - thanks!