Electroclash is karaoke too 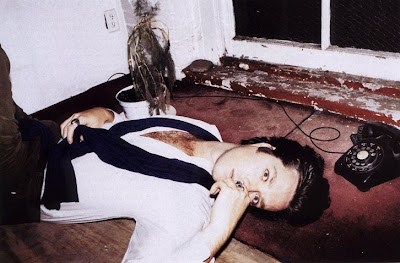 Rufus Wainwright is talking more about his new album Release The Stars. He told Q Magazine that he's "going for the sound of cash registers,' with "accessible, poppy songs." Some album details are revealed:
Neil Tennant co-wrote Tiergarten and sings on I'm Not Ready To Love, while actress Sian Phillips "narrates" Between The Legs, whatever that might mean. 3/21 edit: I don't think Neil sings on Not Ready and the Sian P. bit is more of a spoken monologue (RW's term) - it's the highlight of a brilliant song (BML).

Do I Disappoint You? was inspired by Rufus' love life and Release The Stars (the song) is based on his reaction to his mother's illness last year.

There's a funny bit of irony in the inteview when Rufus says, "Neil does love the sound of his own voice." Right, Rufus! He goes on to say that "This album was made to be sold," so I hope it does, although that comment may have been in jest.

HMV reports that Rules And Regulations is "electro pop" - so how long will it take for some weasle to say he's imitating Mika? 3/21 edit: This song is not electropop.
Posted by xolondon

So you don't think Kabbalah has toned down Madgie?

I daresay she wouldn't give us the time of day during the Blond Ambition days. And in many ways, she was way cooler then. I mean, take another look at Truth or Dare. Pure D-I-V-A to the max!! You were doing good to spend a moment in her presence without getting slammed!

Now you see her adopting children and going all Bono on us. Which is fine--I think she's doing a great job. I guess my point is that Madgie seems to be nicer (!) to her fans now than she was then. But make no mistake, that diva-persona is still there, I just think she knows how to play the game better now. :)

Hello, you're blog's great! I know you post on Popjustice too (not a member there, just a "lurker"). I see you mentioned Mika and I just wanted you to know that Patrick Wolf has remixed his next single, Love Today. I can see you're a big fan of his (PW) and I thought you'd might like to know (you probably already do though o_O).

I'm a fan of Rufus Wainwright and Mika but not so much Patrick. I really like his image, his songs, his music but I can't stand his voice. Which is a shame because I'd really like him otherwise :-(

I met Rufus when we did a photo shoot with him for work. He's super-shy. So then, if you met him, you could just give him naughty touch and he'd not protest.... not that he would anyway. He'd just sit there looking side to side, giggling. 'Kay, bye.

Namedropping slag! :) Good to know, though, that he is shy and not cunty.

I had no idea about PW mixing Mika. That's a bit unbelievable really.