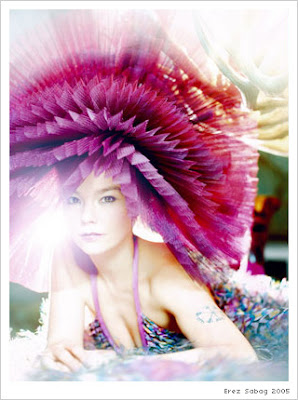 Pardon the purely reconstituted post, but I wanted to relay some info about the Björk album Volta. The first single is Earth Intruders and MTV describes it this way:

Earth Intruders is an industrial-tinged number, rife with video game-esque atmospherics and calypso tonalities — think Nine Inch Nails meets Devo. A rhythmic, marching sound runs throughout much of the track, which "portrays the emotions of impatience, urgency, and being very eager to communicate." In it, she sings, Here is turmoil out there/ Carnage rambling/ What is to do but dig/ Dig bones out of earth/ Mud, graves, timber/ Morbid trenches.

Other song titles include: Innocence, Hope, I See Who You Are, Declare Independence, Dull Flame of Desire, Wanderlust, My Juvenile (with Antony Hegarty)

Before all this, Björk's cover of my #1 favorite Joni Mitchell song, The Boho Dance, is due out on April 24. More on that soon!
Posted by xolondon

That picture is phenomenal. I can't stop looking at it.