This is Sarah Nixey talking 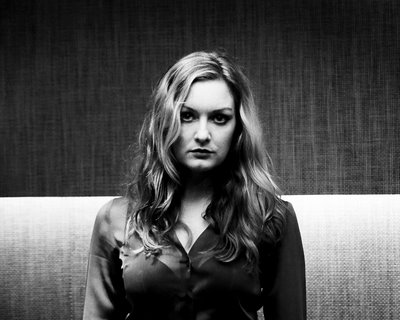 You may have seen that Arjan is whipping up a froth about Sarah. It worked: I love love love the Lodge remix of her song Strangelove (no, not a Depeche cover) and you can hear it further down this post.

Now, Sarah has very tenacious PR getting her name onto blogs. They realize which blogs are appropriate for Sarah support (unlike the people who think I should be hosting Lucinda Williams contests - not to slight Lucinda. But I digress). I completely misunderstood this bit of Sarah's press packet, written by the esteemed Paul Morley:

She's doing her own thing, liberating herself from having to sing/act the songs of the parts of Black Box Recorder that fancied themselves as a diseased Lloyd Webber and Rice, or a violent Tennant and Lowe, or a creepy Lennon and McCartney. She remembers her odd days in BBR with fondness, but is now happy to be concentrating on developing her own way with language, melody and pleasure, to be breaking away from the Black Box boys disturbed obsessions.

That got my feathers up, but the rep said to chill: "Who wouldn't anyone want to be a creepy Lennon and McCartney?! it's meant in good humour..." The press packet also has a description of Sarah's music / style that is so well composed it makes me want to give up blogging:

Sarah sings, talks, whispers and sighs moody, mesmerising nightlife city centre songs and tender beat ballads about things she has remembered and things she will one day remember.

That says it all really. I have not heard the CD yet, but Sarah's myspace page is streaming several new tracks that sound good. She has a Goldfrapp thing (Felt Mountain era) going on, like eerie sixties soundtrack music.

The Strangelove mixes are out on Dec 11/12 on itunes or TuneTribe with the album to follow in February.

Shameful PS: Would you believe I stupidly sold all the BBR albums I had?
To quote Streisand and Gibb, "What kind of a fool am I?"
Posted by xolondon

Absolutely shameful you sold your BBR stuff! Really amazing records, those. Can't wait for this, to be sure! (And my copy of the new Luke Haines is arriving this week, FINALLY--it truly is Christmas).

Black Box Recorder was great. Is it possible you somehow accidentally sold their albums? Looking forward to Sarah's solo album! Are you going to sell that one before or after listening to it? ;)