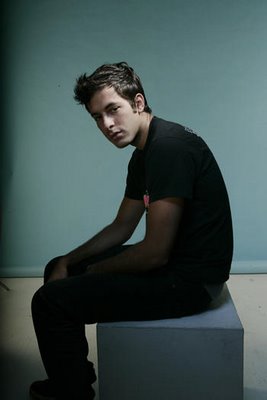 Let me begin my 2006 "superlatives" now, m'kay? The Producer Of The Year is, without a doubt, Mark Ronson. Vim and vigor are great old words to describe his work in '06. Some of his credits this year include:

Ronson brings a brilliant, soulful sound that's often distinguished by his work with the Dap Kings, a horn(y) combo. The epic Amy Winehouse album is probaby the best distillation of his talent thus far. Mark even has his own label, Allido, and on April 17, releases an album called Version. It will feature reworkings of Coldplay (God Put...), Titney (Toxic), Kaiser Chiefs (feat Lily Allen on vox!) and The Jam (Pretty Green, very BowWowWow-ish and sung by Santo Gold).

I just have to say for the record that most of this post was actually written on October 22. I am not copying Mr. PJ., nor have I heard the new album, but PopJustice is right about Ronson. Expect Mark to dominate 2007 with his fresh updates of great old tunes and his buoyant production for other artists.

And by the way, forget Timbaland, he is an arrogant fucker.
Posted by xolondon

"Stop Me If You've Heard This One Before" is amazing--I couldn't stop listening to it everywhere I went today!

On a side note, I love reading about producers--especially when knowing about who is behind certain songs allows you to look for the commonalities between them--and, to be honest, I had no idea who Mark Ronson was. I'm definitely going to keep an eye out for his work now, though.

THROW it in? Throw what? Ewww. He looks like you, so that is xtra nastayyy. You old slapper.

But I love myself, so it would be dream come true, luv.

Wow. It's really strange reading something that explains what I'm thinking better than I can think it, if that makes sense. I pretty much run around the room yelling "Geniussss!!" by the time Daniel Merriweather brings in the whole "keep me hanging on" bit!

can't believe Ronson's the wiz behind "Ooh Wee" too... this guy doesn't stop