Word Of the Day: Puerile 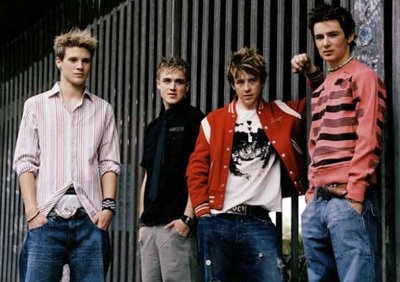 My trolls knows that I love to read Heat Magazine every week, which means my budget for this magazine is approximately 275 dollars per year [oy]. I may have never seen Pete and Nikki, or Chantelle and Preston, but hey, I know who they are and how big their dicks are, etc. Anyway, last week's Heat had an interview with McFly, whom I have also never heard, but seen pictures of taking off their clothes at G-A-Y., etc. Here is a choice bit of the interview that I know my gutter scraping readers will enjoy...

Did the rest of you trim (your pubic hair) specially?
Danny: I do mine anyway.
Harry: Dougie hasn't got any pubs.
Tom: I don't have special razor so I can't do mine. [To Danny] You can't do it with a normal razor can you?
Danny: I use hair trimmer.
Tom: I haven't got one.

Danny, maybe you could hold some kind of razor trimming masterclass for the others?
Harry: You could open a little body hair salon.
Danny: I'd like do some lightning strokes on mine.

Who's got the biggest willy?
[Nervous laughter]
Danny: [Grabs his crotch] Me, without a doubt.
Harry: I don't think we've ever stood in a circle and measured.

Isn't that what boys do?
Tom: You don't measure, you just say things like, "Look at this weird lump on mine."
Dougie: We know what each other's bumholes look like though. Harry's is like a foetus.

Trivia question: McFly is named after an American movie. Can you name the movie AND another band named after the same film?

Okay, I just listened to McFly and hope never to do so again.
Posted by xolondon

heartbreaker. is my love of these boys so wrong? Do i need counselling? An intervention? One of those things where you kidnap and deprogramme me?? Aidez moi!

Oh Paul, it may be a little wrong, but we all have our indiscretions.

I really wish they'd just go back to promoting their music and leave the gutter-talk to The Pussycat Moles. I love these guys but I hated this interview. It's really quite saddening.