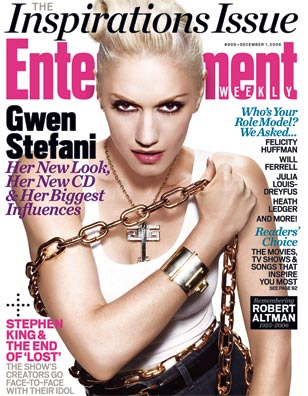 La Love on Mrs. Rossdale in the new Pop Magazine:

"Gwen is really light. But you know, we were once at SIR studios, and I was with Melissa and I was nude and Melissa was in her panties. And then Gwen walked in with a poodle and she said, 'You know, I've got this huge platform and I don't know what to say.' I said, 'I'll write your lyrics,' and she goes, 'What are you guys talking about?' And at that time Melissa was sleeping with a married man and I was sleeping with a married man, and she looked at us and said, 'You guys think I'm dumb, don't you?' And we were like 'No! No!' That was my one funny interaction with her. After she left, I said to Melissa, 'If we were in high school right now, you'd be in the art class, Gwen would be in the cheerleading squad and I'd be in detention.'"

So stars really talk this way? "I've got a huge platform..."? Jesus. Note that Gwen is on the cover of the new Entertainment Weekly. In it she finally addresses the Margaret Chos' accusation that her Harajuku Girls were an Asian "minstrel show." Cho's response is classic. That'll be on the blog soon! click here for more.
Posted by xolondon

is it just me or did that MAKE NO SENSE?!?! Courtney is teaching Lindsey how to write...

Cho's response is by far the funniest thing I've ever heard from her. Gwen should do a much better job at addressing the issue if she wants to be taken seriously on the subject and you can't help wonder if she didn't really know/remember who Margaret Cho is in the moment during the interview.
Actually I was wondering to what extent Cho herself has enabled racism when I saw blurb in The Chron a few weeks ago talking up seeing Cho's latest standup gig for "her hilarious impression of her mother". I must be one of the few who has never found the "impression" funny, it's just the standard "Asian accent" that has been used by many a racist. If that is the highlight, which I don’t think it is because her shows seem to be revivals of a sort for people of similar political views, then it is creating a legitimacy for a stereotype that almost never reflects reality in my experience.

I like Margaret, though she pushes the line. I think there is more going on in her comedy than you give her credit for. Her audience is not, say, Howard Stern's audience, many of whom lack intelligence to get the irony or full picture of some of the stuff she does. I see her as addressing HER reality of being a first generation American with a (sort of old school, but not quite) Korean mother. Clearly she knows that the mom routines are popular and play on stereotypes, but overall her comedy is laced with enough discussion of racism and stereotypes that I think she is on safe ground to criticize Gwen.

We can assume Gwen is FAR from a racist, but it's clear her Valley Girl-esque "it's an art project!" is NOT an adequate answer. I do see where Gwen is coming from and I believe she means well. Cho has a forked tongue and knows that dizzy Gwen is an easy target.

If you see Cho as trading on stereotypes, well, who am I to really argue she isn't? She should probably try a show without a Mom imitation, yes? It's become a crutch.

Oh come on, hurry o n with the Cho response...I love her and still haven't seen her live. You need to space her stuff out or you overdo it.

I think it's pretty understandable for Gwen to say something like "I've got a huge platform" - isn't that pretty much what "What You Waiting For?" is all about?