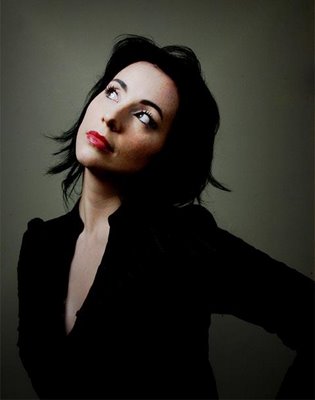 What a beautiful album and, with no doubt, in my Top 10 of 2006. Kate Havnevik, who looks a bit like the other Kate in the photo above, is a 31 year old Norwegian singer/songwriter. Her first album, Melankton, which means black rose, was partly produced by Guy Sigsworth of Frou Frou fame (and producer of numerous great songs includng Madonna's What It Feels Like For A Girl). It's an album of moments. It's sweeping and intimate, glacial and warm. Here are some of the specific moments I like:

Unlike Me: The album opens with its grandest, most perfect song - the kind of tune Bjork abandoned a couple of albums ago. I cannot figure out the narrative of this song though...you think you get it and the chorus twists it around with one line: Unlike you, I am not pretending.

Not Fair and You Again both sound ripped from a Frou Frou record. Catchy electronic pop music.

Travel In Time: the added track for the UK version has a delicate, girlish ambience. Ballerinas will dig it for the plucked strings, like The Nutcracker.

Kaleidoscope: Elegiac strings open this song, sure to be used in some funeral scene in a movie (though the song is jauntier that its intro). I also like the Nordic pronunciation - kalayydoscope.

Sleepless: The moment at 3:01 where the song sputters and comes apart like a hubcap rolling off a wheel, before glacial synths pull it back together.

Note that last week the prolific Kate (wiki) released a non-album song called So:Lo, a more guitar-based tune featured this year on Grey's Anatomy. The track will be officially released on a separate album in 2007. Kate is to Grey's as Imogen is to The O.C. - they use her music a lot, which is a fantastic way for these songs to get heard in this shitty age of music companies who have no idea how to promote a record. [ed note: It isn't really me who kills artists. It's suits with no taste and no marketing creativity.]

Darling XO, thanks for this great post on Kate... For me, the CD was not as immediately hooky, but it definitely a grower and will be in my best of list, too.

I just saw Kate in concert last night in Chicago. She was great! Also got to meet her right after her performance--a real treat! :)

I really like Melankton a lot. She sang "Unlike Me" a capella, as well as "Grace" from Grey's anatomy, which actually brought tears to my eyes. I'm not sure the crowd was too into her because she was only the support band, but I got my $$ worth!