Oh to give you money 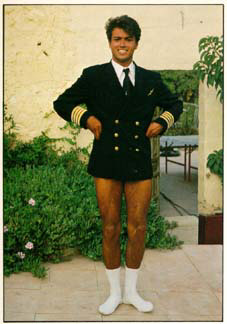 Smooth crooner, hip shaker, weed lovin' narcoleptic and self destruction artiste Jorge Miguel is about to expunge a needless cash cow hits record. I'd like to preview clips of the "new" tracks for you:

George Michael Heal The Pain (feat. Paul McCartney)
Very similar to the original, but it sounds a little busy on the chorus as he tries to squeeze in Macca. Sorry for the lack of more Paul on the clip. B

George Michael Understand
A raging electropop disco classic. Not. It sounds totally phoned in, though it's better than excrement like A Moment With You. Vaguely twangy at times. C

George Michael This Is Not Real Love (feat. Mutya)
I may be the only person in the world who actually likes this duet with my beloved Mutya Buena. Why all the hate? How is this song worse than any of his ballads? It takes a few listens though, I'll grant you that. Warning: the remix that's floating around is so shitty I deleted it midway through the first listen. A

George Michael An Easier Affair
This song got a lot of stick, especially for the lyrics in the first verse, but it's actually a classic GM pop song with a great chorus and a lovely coda at the end that seems to work well post-election: Don't let them tell you who you are is not enough. Don't let them tell you that it's wrong that you want my love. Note though that I still don't believe he's having so much fun. B+

Wham If You Were There
Not really a new track, but an album cut from Make It Big - I did actually! - that deserves a listen years later. B

Tony Bennett w/GM How Do You Keep The Music Playing
The full horror, not a clip! Let's talk about this recent duet with Tony Bennett. It starts out nicely (despite being pure schmaltz), but deteriorates into a screeching piece of steaming bombast in the final mninute. Download it and listen to what happens at 4:30. Who told Tony this was a good idea? He cannot carry those notes and it's so inappropriate for the song. F
Posted by xolondon

That old queen's only good moment was "Fastlove." He's on the banterview list, actually. Probably will be posted in the next week or so.