Off topic: The Return of Edie Sedgwick 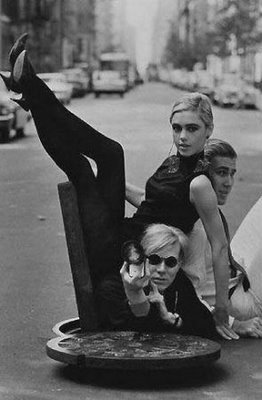 When I was growing up I was obsessed with Andy Warhol and Edie Sedgwick and I would just stare and stare at the picture above. I'm still not sure what attracted me to them, other than a fantasy of being in New York and being someone else. I was convinced for the longest time that I was going to grow up and meet Andy Warhol at, you know, The Factory, but then he died and that whole fantasy went with him. 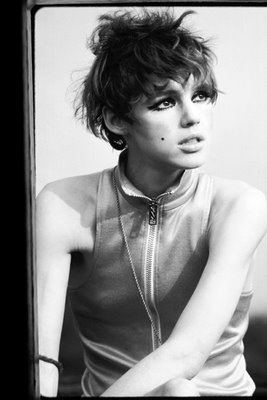 If you're interested in Edie Sedgwick, you must read Jean Stein's amazing book Edie: An American Biography (it's since had a name change). It's told in brief narratives directly from the mouths of people who knew her.

Many of you will already know that Sienna Miller is playing her in a new movie called Factory Girl (preview below) that's been in the works for 20 years. Sienna looks just like Edie, but I'm never too hot on Brits playing Americans. Guy Pearce has Andy Warhol down, but Gayden Christensen is horribly miscast in a Dylan part - and there's no proof she ever had an affair with Dylan, by the way. So I will see the movie, but I hope it sinks fast if it stinks.

Edie only lived 28 years and her period with Warhol lasted just about a year, but her impact on pop culture (as a youthquaker and Warhol Superstar) was pretty vast. Let me end by saying that I was also convinced I would have a band called The Youthquakers. Be kind, I was very young....

update: the dorkus who posted this preview on Youtube thinks he owns it and won't allow embedding, so just double click on the screen below.

Sienna is dead to me after dissing my hometown. She can go stuff her box with dynamite. I'm also dismayed that she has a part in the movie adaptation of one of my fave books, The Mysteries Of Pittsburgh, by Wonder Boys-author Michael Chabon...

My take on her behavior: Sienna Miller is a bigass junkie. And I am not convinced she has that much talent. Her success hinges on her association with Jude Law. That sounds sexist, but c'mon...

Have you watched the American Masters, PBS thing on Warhol? I've taped it, but haven't watched it yet. I can take edification in small doses. I watched the Independent Lens on Sesame St, so I think I need to see the Warhol one when I feel the need for pop art. I remember when Warhol was on the Love Boat, which really, really dates me.

And when I was at Urban Outfitters most recently, I noticed that they had a bunch of Warhol stuff.which I was way conflicted about.

Xo, have you been to the Warhol Museum in Pittsburgh?

I have not been to the Warhol(a!) Museum, sadly. Someday...

Barbara, if you think about it, Urban Outfitters is too fancy for Andy! It should be WalMart or Target! One of his hallmarks was the pop marketing/mass production of "art." I'd also like kids to know who he is - he and Keith Haring. More on Keith someday.

Does anyone have any idea where I can find the first image in poster form? I have also been captivated by it for a long time, after seeing it hanging in a teacher's room in school, and have been looking all over for it! I know it has to exist somewhere...