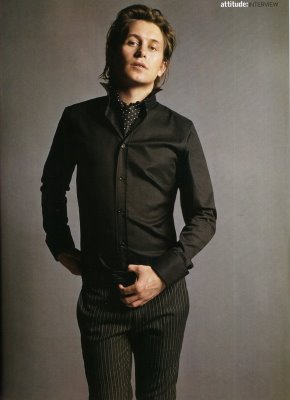 Can a voice sound auto-tuned and organic in the same instant? “Patience” is not so much a Take That comeback as a solo track by the “big-boned” Take Thatter that Robbie wronged (Gary Barlow). It’s catchy in a power ballad kind of way, but sadly makes me wonder how Barlow will one day hit the high chorus notes, at the age of 50, on their umpteenth reunion tour. Missing in action is the croaky-but-clever voice of underrated Mark Owen.

It is true, the talented one in the group is 34 yo Mark Owen. His 2005 Believe In The Boogie single (about Robbie? Gary?) was one of the best Britpop songs of the last two years. Produced by Tony Hoffer of Beck, Phoenix, and Air fame, it highlighted his distinctive voice and a sensibility that weds indie and pop; that track is a perfect merging of both. [2005 interview]

If yoy've not heard this song, watch the (jerky) video below. He may sound odd at first, but watch it through the stomper of a chorus. It's a great song - you just have to get used to his voice.

Now, recently Mark has looked kind of... old. As in old Eastern European crone pushing her groceries home in a cart. So the Attitude pics are a bit of a relief. The whole Take That reunion seems to be done with a fairly high standard of quality. I am not a TT fan really, but I am paying some attention.

Here is Mark's greatest single and its lovely b-side: 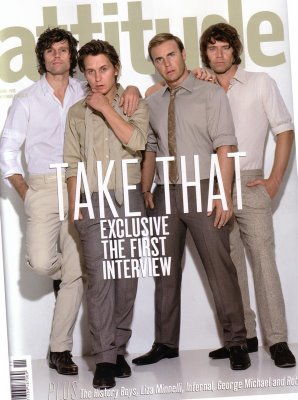 Fnally, bravo to "Little Markie" for not flinching at Attitude's comment about his glittering contribution to faggotry! Watch their now shocking fagtastic video for Do What You Like at PopMuse. Also witness a girl fan's video of him at a signing. He has good teeth.

Mark would be a hot bounce. Gary's probably a bore in the sack. Nice review!

sigh. my obsession with take that has returned, and i have been listening to mark's last album a lot lately too. Remind me to email you a great acoustic version of Believe In The Boogie. such an amazing song! I am excited for their return...check my post tomorrow :) (on the other side of the street)