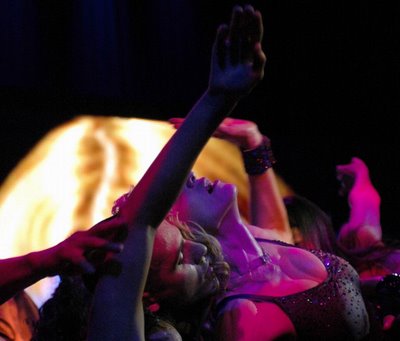 It's Thanksgiving now and, at the grocery early this morning, a woman wished me a Happy Easter! I guess she's thinking ahead? The Macy's parade was just on and has such brilliant stars as Diana DeGarmo. Woot for the D Listers! Whatever, I have 4 days off, so I am a happy fool.

Some comments about the Madonna Confessions Tour on TV in America last night. The filmed version did a great job of capturing Madonna's best live show. I tend to forget that not everyone saw this tour (though they might as well have with youtube). Like the show itself, each song was filmed in a slightly different visual way. Some specifics:

- The sound was a little odd. She did sing live, but it didn't seem like it in this film, the vocals were so heavily processed. Whatever, it sounded great except for Erotica which seemed muffled.

- I didn't realize how much Donna Summer was included in Future Lovers. Did you notice how smiley she was during that bit? Like, "Oi! I'm on the tube!"

- Some performances actually seemed better on film: You could really hear the Stuart Price version Like A Virgin and Isaac (which was cut a wee bit) seemed had more oomph with the camera directing what you should look at.

- My fave performance, Music was presented well (I thought they might fuck it up!). I liked the 70's split screen and they did a good job with M's big disco moment, the cutaways were pretty brief. Also loved the way they froze the rollerskaters midair in the final seconds.

- It was clear again how much she likes Cloud, the dancer. He was particularly prominent during Music. Longtime fans would hav eno clue that Donna DeLory was in that show though. I didn't see any lingering shots of her.

- Let It Will Be will surprise people who did not see the show live. The energy was there, though the edits didn't really allow you to see that she was constantly in motion during that song, writhing on her knees and flailing all around the catwalk.

- Sorry drew a huge response in NYC but you could not get the sense of that on TV with the crowd noise cut out. I think that song is a a;ready a classic.

- I still didn't like La Isla Bonita. I said it before that the definitive version of that song was done on the Drowned World Tour. She should have done something more surprising, like Open Your Heart or Borderline.

- How could you miss the mucho Madonna ass shots? I laughed out loud at a fan comment about the Camel Toes Segment of the show (the Abba-tribute white/purple leotard).

- NBC, in classic style, bleeped her Suck George Bush's Dick! scream, but allowed the closeup of her saying it so you could read her lips.

All told, an excellent video. Much better than the weak Drowned World DVD.
Posted by xolondon

Obtained this online and I absolutely loved it. Truly her most dazzling of shows, very pretty it seemed. I did enjoy Johan's direction looked great, but I really would have loved to see "Let It Will Be" without so many disruptions.

And I think that - followed by "Music Inferno" - was my favourite performance on the aired show.

The studio version of Music Inferno has leaked xo, have you heard it?

Yes, I do have that, thanks!! I agree with your comments, btw.

I agree, I think the show was fantastic and pretty much agree with all your comments. "Let It Will Be" was an amazing performance live, and it's true, I don't think the raw power of her dancing came through very well in the broadcast. It, quite simply, was the most organic dancing we've seen from Madonna in quite some time.

Great blog! And thanks for the shout on The Zapping's blog comments. Glad to see someone else has a bit of a Stevie Nicks thing going on. I'll definitely be coming back here.