Sam's Town: What happens in Vegas 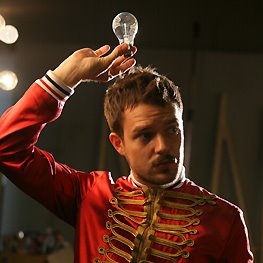 The Guardian has it right. I am happy to give The Killers a generally favorable review for their CD, but there is another side to this story. Recorded in a casino, Sam's Town is loaded with hooks. Some take longer to appear in the crashing muddle of guitars the band decided to use for the album - clearly influenced by what works in a stadium. My roommate, who tuned them on to me, heard this album once and said "Ugh! Dirges! Where is the fun?"

Roommate Julie has a point, but there are some real gems here. I think that "Bones" stands among their best, with it's winky choral "Come with meee!" intro followed by those fabulous synth bell sounds that are so 80's. It even has horns and a fab spoken word bit. When done well, we love spoken word bits! "Read My Mind" has a bit of synthy atmosphere pawned from U2 and "Bling" has a chorus reminiscient of something from The Cure's Kiss Me Kiss Me Kiss Me.

In a Janet Jackson Twist, one of the best songs is not on the album. "All The Pretty Faces" has Iron Maiden metal chords, decent wailing from Brandon and a killer (heh) melody. Just replace that crappy "Uncle Johnny" with this one on your iTunes playlist!

Need I say again how brilliant "When You Were Young" is? Aye! Fantastic! The song is an over-the-top Springsteen pastiche, but it's so urgent, melodic and well crafted that it succeeds on its own. Totally thrilling and I (just me, from what I've read in reviews) love the "burning down...on the back of a hurricane" line. Add to that a wonderfully pretentious video and it's all just peachy. Sort of...

There are indeed many problems with Sam's Town that are leaving reviewers wide berth to slam it it: 1) The lyrics are sometimes horrifically trite. In some cases ("When You Were Young") the Springsteen homage works fine, but there is a spoken word bit at the end of "The River Is Wild" about fairgrounds that is ripped right from Born To Run and is truly embarrassing. Why not replace those lines with Brandon screaming "Brooooooce!"- it would be more subtle. 2) The vocals on the aforementioned "River" are strained, to put it nicely. Brandon is trying hard to push his voice, but let's leave the uncontrolled singing to Sinead O'Connor - she has the pipes for it. Brandon just sounds like a Robert Smith/Cure fanatic. 3) The album has an Embrace problem going on. It needs more of a balance between big stadium thumpers/dirges and lighter like tracks "Read My Mind". Thought I find the "Enterlude" and "Exitlude" kind of infantile in title and sound (a circus theme!? How new!) I like the use of piano on the "Exitlude" - the CD needs more of that. Finally, 4) the band member with the big face needs a haircut. Now. That brassy, frizzed-out mane just adds to the bigness of his head. I say that with love, as someone whose hair is often too big.

Let's just summarize by listing the tracks I think are keepers: "Bones", "Read My Mind", "When You Were Young", "Bling" and of course, the neglected metal-chord fiesta "All The Pretty Faces". This is the age of iTunes and track by track buying. Take advantage of that!

Sorry Killers fans. If you're looking for the next "All The Things That I've Done" it's not here, but it's probably on that Delays album you ignored in January.
Posted by xolondon

you always find the best Killers pics - i particularly like this one of B-Flo. Who hasn't wanted to go out and buy a red circus jacket and then pose with a lightbulb that signifies "i know - lets make a bruce springsteen album"....

from reading your review, i once again realise how indiscriminate i am about music from bands i love (although to give me credit i am still only luke warm about Under The Iron Sea)...i really like Sam's Town but totally agree with you about the stand out tracks. However (just a fancy way of saying but, and but always negates what you have said before e.g. i like her but...!!!)i think Why Do I Keep Counting is a great tune that builds up and for me is this albums All These Things...

I'm right with you about loving spoken word bits and maybe that's why "Bones" is my fave track at the moment. I was very pleased to see them playing it on SNL this weekend. Love the review.

Not gonna read what I'm sure is your superb review till I hear the album tomorrow... you spoiler, you!

Hmmm. I'm getting a mixed feeling from this review. I feel you've definitely left out mentioning one of the best songs, opening track "Sam's Town."

"Bones" is actually one of my least favorites. Just as I felt about "Mr. Brightside" off the first album, it's just too obviously aimed at being and sounding like a single.

I will agree that "The River Is Wild" is a shameless "Born To Run" knock-off... why not just do a cover of "Born To Run," then?

I have to say that seeing them live last night really pushed me into a deeper appreciation of the album. This goes along with your theory that there's a notion these songs were created to sound good in a concert venue.

But, to be honest, I think this album is miles ahead of Hot Fuss. They've gotten much better at sructuring songs and taking chances.

And by "getting a mixed feeling from this review," I meant from YOU, not from me... :-)

Dluv, it's funny, I had planned to write about the title track and just got lazy. It is good. I think my reaction to the CD is sort of the same as I felt about "Under The Iron Sea" - it's just not quite there. BUT I think it will be a huge success. I just don't think I will play the whole record. Maybe about half of it.