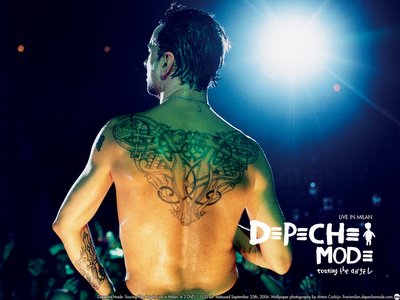 Two weeks ago I went to a movie screening of Depeche Mode's new concert film Touring The Angel. The movie (trailer) brought back the night I saw them live last December. Fantastic Milan show captured in a very electric film. Both create unique visuals for each song - the film using video tricks that mostly add to the ambience. Dave Gahan is, of course, incredibly charismatic live. Funny, a force of hyper energy and a force of sexual energy. Martin, well, he looks really scary in this film until he takes off his stupid hat and poor Fletch looks a bit like Elton John. Here are a few specific comments, some with links to the DVD video...

The director throws away the clever Enjoy The Silence king cartoons, so dominant in the live show. You barely see them in the background. Boo!

Precious is more muscular live, so it loses some of its softness (ed: redundantly redundant sentence). It does NOT lose the emotion, which is represented by a weird effect where the frames break into pieces at varying intervals. You know, like a marriage breaking into pieces...geddit?

I like the still-shot effects on Suffer Well though some will find that annoying.

Home is a favorite Depeche song and I love how Martin sings it here- his voice is deeper live. Thank God he rips off the annoying hat during his performance. Strangely, it's gauzily shot through as if through a Vaseline coated lens. One reviewer called it an acid trip, which it sort of is, veering close to intrusiveness, but the director nailed the final minute of the song when Martin stand there, messianic, with his arms open wide. It was also nice to see Dave's reaction, watching and dancing by himself in the wings.

There is a shot toward the end (perhaps on arm-waver Never Let Me Down Again?) of a guy bopping along in the audience, wearing the Enjoy The Silence robe and crown. Hilarious!

The performance of Just Can't Get Enough is amusing. Martin's facial expressions veer between bemusement and eyerolling disdain. Dave remains cheery and hammy throughout…this track is so pop it could be a Madonna cover.

The 2-disc DVD, out now, comes with a CD of live Angel tracks, all culled from the newest album.

Last, watch the lovely finale Goodnight Lovers below - I LOVE this song so much. Notice how Dave kisses Martin on the cheek at the end (4:35ish), yet bitchy Martin can barely wrap his arm around Dave's shoulder! Almost, but not quite...

I've been eyeing this for a while now along with all the re-issues. This Friday, I'll have to make a choice.

I really wish they would re-issue their live video of 1985 "The World We Live in and Live in Hamburg." It's one of the greatest. I still have the VHS of it which only has about 10 songs. I've seen imports with the entire concert.

i like depeche mode the same way i like erasure - i may not listen to their songs that often, but i am comforted to know that they are still there. Was into them in a big way with someone else in about98/99 but then that person broke my heart and broke me a little bit so i went off them :*(

I saw them for the Violator tour in summer of '90, and had 4th row center seats! It was awesome. Nitzer Ebb opened for them (in Pittsburgh... Sienna Miller's fave city!)

Now I'm all about getting the remastered albums.