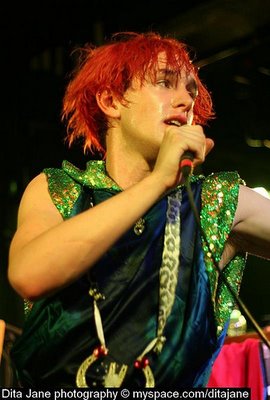 The Patrick Wolf parade has begun...

Patrick podcast #1 filmed at Patrick's flat! Starts with new song Blue Bells. As I suspected, the freaky man is really not freaky at all, sitting there in his absurd getup, talking like a normal person. Really likeable. And not as rentboy skinny as he used to be.

Patrick performs The Magic Position in Manchester on October 2. The song I compared recently to Madonna's True Blue. His clothing is ridiculous, but it's a good song. He's got a lot of balls - he doesn't give a shit what people think. It reminds me of the kid in Dazed And Confused who says "I want to dance!"

Bonus: The video for Wind In The Wires. Dark, druggy sexually provocative film that looks great, but probably cost nothing to make. He puts himself out there as a sexual object in a way you don't see males usually do, so it's a little disturbing. The unit of family bit (in the song) at about 2:01 still gives me chills.

Honestly, I think he is the first artist to come close to Bjork and Kate Bush in his fearless use of music and visuals.
Posted by xolondon

I love that he doesn't give a shit, and fearless sums him up. The Bjork/Kate Bush comparison is spot on, I've been trying to describe him to bewildered mates this week while sporting the t-shirt, if I'd only thought to say 'young male English Bjork' the conversations might have been a bit less painful!

New song "The Stars" literally sounds like Bjork! His podcast /use of the web for this CD may help him branch out. Let's hope his new album cover does not make him look 10 YO like the last one.