Kiss me with your mouth 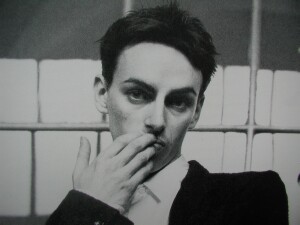 You can hear Robbie Williams' cover of Stephen Duffy's 1985 track Kiss Me at Zappin'. Duffy is now known as the man who produced Robbie William's most bland album, Intensive Care, but he has been a recording artist for over 20 years, with at least 12 albums under his belt. I would say that Robbie should've had someone else produce the songs he wrote with Stephen; that night have worked better.

Anyway, I thought I would complement Paul's post with the original Duffy MP3 and video. This song is known to many Brits, but Duffy has virtually NO profile in America. I should say that I don't like Kiss Me much, though it has a great first line:

In my young life I have received
Callers as though they were Christmas Eve.

I quite like Duffy's band The Lilac Time and will someday do a post on them. It's essential that lovers of modern British pop know about Stephen Duffy!

Thanks to the great Duffypedia for the picture!
Posted by xolondon

I would say Stephen Duffy has no profile in the US, just a limited one. "Kiss Me" still gets plenty of radio play in the Bay Area on a number of stations. That's more than Robbie Williams has ever has in the US.

wouldn't that is- doh!

Stephen Duffy has also co-written a number of songs on some of Barenaked Ladies albums in the last decade, as well as lead singer Steven Pages recent side project called The Vanity Project (the self-titled album was written mostly with long-time collaborator Stephen Duffy.)

He also released a cd titled Dark Circles with Duran Duran's Nick Rhodes under the group name 'The Devils'.

and that's you in the banner, right?

On a side note, I've been introduced to so many new artists (that really aren't new but I just don't know about) through this site, but I really wanted to thank you for the Jeff Buckley song from the other day...yes, I had never heard any of his music before (honestly, I'm such a music novice, I don't know how I get by sometimes), though his name was familiar (for "Hallelujah," I think), but he was a revelation :)