Fill our little worlds right up, right up. 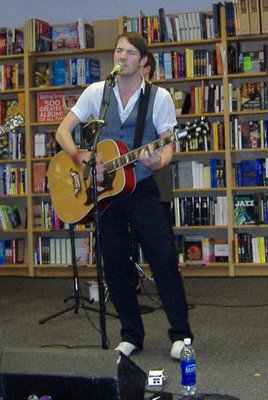 So I went to the see The Feeling at Borders. We got there early to avoid the "crowds," so I hung in the travel section while they played Sewn on a loop over and over again. Bored with that section, I decided to go over to the music mags. I'm in that aisle and a guy is crouching down near me... you know where this is going. Yes, trolls, it is Dan Gillespie Sells! So I stand there for a second - what to do? what to do? -and as I'm passing back by him, I say, "Ah! I'm here to see you!" He graciously stands up to talk with me. In person he is very petite - maybe 5'6", bird-weight - I think wrapped in a scarf like me (green stripes, Paul) and wearing that red wristband and vest he has on in every picture and performance. Does he have more than one change of clothes?

Celebrities are tricky for me. I like to think of myself as calm and cool, but I am not. Synchronous chat does not work. I often don't even hear what they are saying as I am mentally trying to formulate what I will say next, so as not to sound maniacal and TAKEMEBACKTOENGLANDWITHU crazy. Still we had a little chat after I said, "I just have to say that this is an ugly part of Virginia- you are not seeing the nice part" and he said that he wasn't really aware because they had just woken up on the bus from Philly. He told me that the Philly show was good, but he said the NYC people were.. rather than say it, he folded his arms over each other to show me. Stiff? Withholding? The Feeling lack a layer of irony that NY'ers expect in their stars.

Aside from being famous and talented, Dan is quite striking in person, so that was distracting too. He has absolutely no bags or circles under his eyes - his face is very pure and angelic and his eyes are very wide apart. Do any of my readers have eyes this far apart? I trust they can see well out of them? I digress...

I asked him how the in-stores were going and he said they enjoyed places where the English came out for them, like Toronto. Yeah, I thought, Northern VA ain't no England. Little did I know...

Chartrigger saw them in Hell-Lay and D'luv told me he was worried no one would show, but then people appeared at the last minute. No so in the Hate State! Only about 7 people there to see them specifically. Two rows of seats for just 7 people (some arrived later), so I made a point to clap really loudly after each song. At some point a few young kids studying in chairs who came over to sit and watch - just sat their with blank faces. Kind of cute. The band was very good about it all - Dan said,"This will be a private performance!" I actually tried to sing along with the end of Never Be Lonley, but everyone could hear me so I shut up.

The performance: They did Fill My Little World (hello Paul!), Never Be Lonely (SWOON) and Dan wanted to end with Rose (he said the title with an exagerrated British accent), but the sickly Mr. Richard Sophie Ellis Bextor Jones nixed it. One audience member called out for Love It When You Call, but Dan said they couldn't do it because Richard felt so ill.

The big surprise for me was that they all sing harmonies together. I had no idea! I thought it was all Dan multi-tracked. They sounded PERFECT. I was amused by a few things: 1) they were all nicely dressed, especially the drummer who had a shirt with a matching tie. 2) They come from the Land Of The Tiny. Only said drummer was of "Amurrrrrican" size. They all have that super narrow rock look, but in nice, fitted clothes. Sadly, my camera was fucky and I did not get the great pics that Chartrigger did. My battery kept dying! gahhh!

The band reported to the few of us having CDs signed that they'll release the album in America in March and come back for a tour then. Let's hope they play at a proper club next time out...
Posted by xolondon

great review of your experience - and i so need to reply to your email :) Glad you had fun - i would've died to see him standing next to me in Borders. I am going to hang out at the Borders in Birmingham all day Weds in case he pops in for a copy of "vest and red band monthly" before the concert...

I'm so jealous! I love The Feeling. How fun to see them live in such a small venue as Borders.