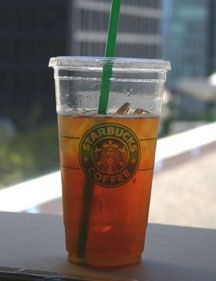 Ugh! The Starbucks gave me Passion Fruit tea instead of iced black tea. Blech! Wretch! Upchuck! On that note, some news and commentary...

Robyn is back! Catchy Tunes Of Sweden has the great new Robyn / Christian Falk collaboration, CCC (or Calm, Cool, Collected). Meanwhile Don't Stop The Pop has her electro-baroque ballad With Every Heartbeat. Robyn is fast becoming the real heroine of cool pop music. When will Madonna move to Sweden?

Robbie Robbie Robbie. Yet another artist who vomits up an enormous 17 song album that needs about 6 songs cut to take it from curiousity to collectable. There are some fine tunes on Rudebox, but many are lost in the sea of drivel. Worthy cuts: Lovelight, She's Madonna, Kiss Me, The 90's, The Actor, Summertime and the Lily Allenesque Good Doctor. The Guardian dislikes it and The Independent is equally confused

Janet Jackson continues to cause huge debate on The Velvet Rope, where the rumor is that Jermaine Dupri will step down as the head of Virgin's weak urban unit. My take? Janet should not rely on one person to be her lover, hitmaker and label exec. Those should be check-and-balance roles. She will recover, but if they don't release Enjoy fast, this album is already kaput.

Want to read about Xolondon's pick for the next President Of The United States? Check here (yes, you have to click to find out who will save the world from itself).

Jimmy Somerville has a new song I Was Born This Way, with this chorus: "I'm happy, I'm happy that I'm gay / I was born this way" heh heh! You can buy it or hear it.

And did you notice how truly shit most of the Hits packages are this year. In many cases, they are by artists who have already released their hits numerous times. This indicates that 1) the industry is in a bad place and 2) some artists may be trying to end contracts. Why in the age of itunes would an artist keep releasing hits CDs? U2, Depeche I am taling to you!

Only a passive denial of a future split from Girls Aloud in The Times. Hmmm.

I was very disappointed with the Project Runway finale. Jeffrey was a huge mistake. I would have picked Ule, which is strange because she was never my favorite. Everyone agrees that Michael choked on the pressure, but whaddya bet tons of celebs ask him to design for them. Read this good New York Magazine piece about the show.

My favorite gym tracks, not that I went this week, are:

Bitchin' Gwen Stefani has been working with Tim Rice Oxley of Keane. Hear that? And that her upcoming song Sweet Emotion is girlgroup tasty? That Wind It Up sucks ugly hole? All true. What's not true are all the fake tracklistings sliding around the web.
Posted by xolondon

Mmmkay, I dunno when I have disagreed with some of these statements more, but I can see some of your points. First of all, I loved Uli's personality (somewhat humble) and her designs were good, but Jeffrey really deserved to win for having the most consistent vision and fashion forward looks. After the shit Laura put him through and the junkie life he came from, he worked very hard, and even Tim Gunn seemed to be happy with the choice. Michael went SOOO GHETTO. What a disappointment.

As for Gwen Stefani, YEA! As for you hatin' on Wind it up, BOO! That song rocked live (so much fun, like Hollaback Grrl on acid--loved that March of the Toys backdrop, but who knows...it might not even make it to the CD ultimately...it's been a while).

Robbie Williams--this is one of my most anticipated releases of the year. Why? Because he has stepped outside the box. While I enjoyed Intensive Care, most people did not. I never want him to go back to the days of Escapology, his most self-centered nadir in my opinion, but he needed something fresh, and if he wants to reinvent himself as a cross between George Michael & the Streets, that's fine by me. It's not like you can have faith in George anymore, anyhow. I saw Robbie on his first US tour in 1999, and it was literally in the top 5 performances I have ever seen. While I have not heard the new album yet, I have heard Rudebox, Lovelight, Kiss me, and excerpts of She's Madonna, Summertime, the Actor, and the 80's, and I really like all of these. There have been some negative reviews (Q magazine gave it a 2/5 while Meatloaf got a 4/5), yet most publications have gone the other way around (NME, Mojo, & Uncut gave very positive reviews). I think we all need to step back & give him a chance to do something other than straightahead Britpop, even though he's good at that too. Nuff said.

The Janet CD is a grower and I love the new Depeche Mode single, and will be getting the full CD for remastered single versions (there will also be a deluxe version with a DVD with most of their best music videos, and, for the first time, Just Can't Get Enough will make its appearance on DVD! (Just buy the Martyr single if you don't want the whole thing).

But I do love Robyn--just bought her Swedish CD from last year. Guess I should have waited for the British one now. Oh well, glad we could agree on something! Sorry to be so contradictory!

I think the whole Robyn thing has passed me by - do i need to do an investigation as i did with the now (and probably always were) glorious St Etienne?

I actually like almost all of Robbie's album but what's confusing me at the moment is I don't know whether I came into it with such low expectations (i am a HUGE fan and was a little worried he'd had a meltdown) or whether it actually is good. Needless to say though it is a bit of a vanity project but one that i think works well. I need to listen to it a few more times, but already songs are in my head in a way that never happened with Intensive Care. I have to disagree with Count Popula though - Escapalogy was my favourite Robbie album...

Yes, most the hits packages are rubbish this year. At least Girls Aloud have a bonus disc with some interesting tracks on...i think artists have got to be more creative with greatest hits in the day and age of iTunes as a lot of people will already own the singles and perhaps only download the new tracks?? And it annoys me when bands just repackage old hits albums with a new track - yes Deacon Blue and Roxette I'm talking about you!

Aaah Janet - how i wanted her to have a brilliant comeback. I truly worshipped this woman from Rhythm Nation (retroactively getting into Control) to AllForYou. But Damita Jo turned me quicker than Darren with morning breath and I just can't seem to access the new album. I need to go back to your review and edit it down... I so want her to succeed. But then I felt the same way about Mariah and I dislike her Emancipation and long for some Daydream days...maybe i'm getting old??

And finally! (do write an essay!)Gwen. Love No Doubt. Eventually loved LAMB. Dubious about her new project but will wait to hear how it sounds before judging...

who knew a random bunch of snippets would be so thought provoking :)

Funny that America cut the best Escapology song "Hot Fudge". I don't think Robbie has one consistently strong album. There is always some pap. Maybe I played it off like hate his new music. I don't - Lovelight is his second finest moment on CD- but there IS some weak stuff on Rudebox (like the title track). He needs to edit. If it were an 11 song record, it would be a major popart success. [you'll fins that is a common stance for me]

Depeche - I thought the last 2 hits CDs had remastered all those tracks? Martyr may fare better in remixes.

Have not heard a studio version of Wind It Up yet, but it seems calculated to play off of Hollaback. You know I am not a Gwen hater!

Jeffrey Runway though? We disagree. :) His best designs (the plaid gown esp) were rips of John Galliano and I think even Versace had a striped phase in the 90s. I also did not see the consistency that you mention, other than that they were edgy (as Laura's were Laura and Uli's all had a cleavage teardrop thing). More than that, I did not respect Jeffrey - found him to be an alienating force. I think it's great that he rose from the ashes of his life, sure, but I wouldn't want to be near him. That was not the criteria for winning, of course, but I felt the judged overlooked A LOT of technical failures when they crowned him. The fact that he already has a label may have been a plus for him...

re: Sylvia Mason - Did the crowd go wild when she did that part in "Go West"?

Over here, she seemed to get louder applause when Neil introduced her - more than Lowe. :)

Did you feel like I did after Jeffery won Project Runway -- like you'd wasted 3 months watching the show for this!??!

I really wanted Ule or Laura to win, too... but I have a sad feeling Ule doesn't have the tough skin for the biz like Jeffery does.

OK, whoever said they aren't acquainted with St Etienne, go out and get what you can before it goes out of print! Fantastic pop songs, delightful singer, great arrangements, very British...what else could you want? Their older CDs are considered their best by many, although the most recent Tales from Turnpike House was superb (I preferred the US version, while it unfortunately alters the running order, it adds a few really cool songs and removes one or two you could live without).

As for Robbie's Escapology, the problem I had was not so much the music, but the constant obsessing over how great he thought he was or how sad he thought he was. I can't remember another album being so self-referential (OK--maybe the Streets or Lady Sovereign, but they are rappers), and Guy Chambers leaving was a big loss. Feel and Sexed up were pretty cool, but on the whole it was a tough listen akin to Madonna's American Life or George Michael's Patience. Should read "Pop star with flashes of brilliance cannot stop talking about their suffering in the spotlight". Take note, Brandon Flowers.

My last comment on PW is that I loved Uli throughout and wanted her to win, but realized that her stuff was always pretty same-y. Her collection was stunning, though. I'm sure she'll get work--if Heidi didn't buy everything already!