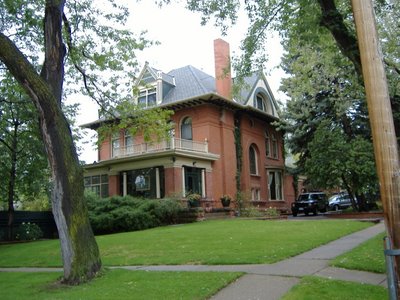 That's one of the houses I "picked out" for myself in Boulder this July. Do you think I can afford it? [donations accepted!] Anyway, now that summer if officially over, I'd like to look back at the Top 20 Songs I played incessantly from May - August. They're in alphabetical order with a few available as MP3s (the ones you are less likely to have).

Bertine Zetlitz 500
New CD is her 5th and I had never even heard her name until
Tremble Clef highlighted it
Camera Obscura Let’s Get Out Of This Country
Swirling Scottish pop, but it does not sound like Belle And Sebastian!
Captain Broke
Throwback to Prefab Sprout. Immaculate debut album produced by Trevor Horn
The Feeling Never Be Lonely
Feelgood song of summer; final bit is chill inducing! I owe Paul for
this group as well as Captain
Frank Silence
Smooth elegant sexpop from a group that should have been
named Planned Obsolescence
Charlotte Gainsbourg The Songs That We Sing
Major single from Charlotte with great lyrics and a greater pedigree
Hard Fi Living For The City
It not only rocks, it thrusts! Hard Fi add an exhilirating element of dance to BritPop
Jessica Simpson Public Affair
I can't help it, I love singing along to it, especially the Diana Ross rip at the end..oy!
Keane Leaving So Soon
Some of you know I took this song verrrrry personally
The Killers When You Were Young
Anthemic, Bruuuuce-y single is a promising teaser for the sophmore album
The Kooks Naïve
What a brilliant vocalist. Love the shag hair too!
Laura Michelle Kelly There Was A Time
Easy listening goodness, written by Neil Hannon, brought to me first by Paul
Lily Allen Knock ‘Em Out
Funniest song of the summer from a Natural Born Superstar
Madonna Erotica / You Thrill Me
Not sure I can ever go back to the original. Her best song in years...
Pet Shop Boys Minimal
Single of the year? Every thing is immaculate, pehr-fect, especially the last minute
Pink Who Knew
The most sorely underlooked album - so good for the car!
The Pipettes Pull Shapes
Single of summer 06? Certainly the best opening moments of a song in 2006
The Pipettes Magician Man
Pure genius thrown away on a vinyl only b-side
Razorlight America
Johnny and the boys notch it up to U2 levels
The Upper Room Kill Kill Kill
What a sweet band, but what a depressing tale of the British music industry
Posted by xolondon

what a gorgeous house - i will go halves on it if i can use it as my winter retreat. It looks like it would inspire me...

btw am so glad you like so many of the groups i introduced you to. Lets see what i can do last quarter of the year. I so owe you for bertine :)

ps - didn't camera obscura do that song about being peed on??

HIDDEN CAMERAS sang a song about getting peed on, silly man! Close though...

Aw. My life's work is done.

That house is beautiful! I'd go halves with you, too, but I'm saving up to buy groceries...

And as for this:


You WHORE! I knew you'd cave.

Hmm,can I go quarters in or whatever for a "summer retreat." from the AZ heat? (Yeah, right.)

I'm glad to know that I'm not the only person that covets houses.

I'm a sucker for a good a-ha post title. And you know my love for Keane and The Upper Room.